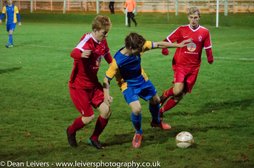 Oadby draw a blank on the road.

Kirby won for the first time in nine outings, putting local rivals Oadby to the sword at Ratby Lane to move out of the drop zone.