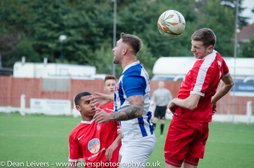 Point For Poachers After Hustling With Harrowby...Joshua Jones reports.

Oadby Town ended their five-game losing run with a draw at home to fellow strugglers Harrowby United, with an injury time equaliser preventing the home side from claiming all three points at Freeway Park.

In a feisty, competitive encounter in front of 90 spectators, it was Oadby who started brightly, with tricky winger Sam Burton causing problems early on and indeed throughout the game, firstly by forcing Harrowby goalkeeper Chris Bennett into a fine diving save before crashing a sweet strike off the crossbar, with Bennett totally beaten.

But with 14 minutes on the clock, it was the away side who took the lead. Bennett’s strong punch clear was played on to striker Sam Robinson, who held the ball up well, found space and played a wonderful lobbed pass over the Oadby defence. Luke Peberdy raced onto the loose ball first and finished coolly with a lofted finish over onrushing goalkeeper Charlie Andrews. Robinson himself was close to doubling the away sides lead 10 minutes later when he met Bobby Lee’s corner at the near post with a flicked header that went just beyond the far post. Just a minute later, though, Oadby were level through Harry Alcock. The forward showed good skill in the box to work half a yard and flashed a powerful shot past Bennett.

With tensions bubbling and a few strong challenges going in from both sides, Oadby started to apply more pressure with Alcock lobbing just wide before Burton, Oadby’s man of the match closely followed by midfielder Callum Armsden, was again denied by the crossbar as a bundled effort spewed off the top of the woodwork after Bennett fumbled the initial cross.
Five minutes before the interval, though, and against the run of play, Harrowby regained the lead after a simple pass and some poor defending presented Robinson with a golden chance as he was faced one-on-one with Andrews and made no mistake, slotting the ball home to put his side in front at half-time.

The second half started with little action in front of goal but tempers threatened to boil over with more crunching tackles, but referee Tom Cooke did well to manage and control the game. Harrowby almost extended their lead on the hour-mark with a goalmouth scramble being cleared off the line and the rebound was fired high and wide; a huge let-off for the hosts. Oadby Town capitalised on this let-off with 20 minutes to go after a long, speculative clearance was made into a very good ball by the determination of winger Sam Burton who kept the ball in play and dribbled into the area from the right wing. It looked as though he had taken one touch too many but the ball broke to influential captain Callum Steer, who unleashed a venomous strike from distance that flew past Bennett to level things up once again.
The hosts then took the lead five minutes later when Harry Alcock flicked on a long ball to Burton, who controlled well and set the ball up on a plate for the oncoming Alcock who slotted home his second of the game with an astute finish.

Following a couple of yellow cards and a flurry of substitutions, Harrowby clipped the bar after a corner from the right slipped through the fingers of Andrews and the away side’s snapshot was inches from finding the net. Harrowby again went close when the ball fell to substitute Matt Clarke in the area, but he dragged his right-footed shot just wide with Andrews making himself big enough to put the forward off.

When it seemed that Oadby were going to claim a much-needed win, an unnecessary free-kick was conceded by substitute Carlton Beardmore, who was booked following his reaction, just inside his own half. From the resulting free-kick, captain Jack Whyley headed on and the ball was stabbed in by Simon Bollard, rescuing a point in injury time for the away side, making it a more bearable journey back to Lincolnshire. On the balance of play, a draw was probably a fair result with both sides having excellent opportunities to win the game, with a combination of bad luck and poor finishing culminating in an eventful yet exciting 3-3 draw. The home fans, who battled the bracing conditions and turned out in a good number despite the Poachers’ recent run of results, were in good voice and were very supportive of their team, urging them on right up until the final whistle, which came after 98 minutes of entertaining and decent football.