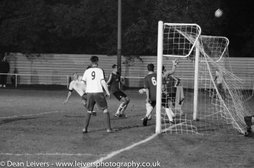 Oadby were again out of luck as a first half free kick from Mapeo Mendes gave Corinths the verdict.

The Poachers produced plenty of good football but often the final ball was lacking. An end to end first half saw Rothwell's Joe Wright pose the first threat with a left wing run and shot across goal while at the other end Callum Armsden's flick played in Jordan Pick who was thwarted by a saving tackle from Corinths debutant Bradley Marshall. Jordan Henson shot across goal for Rothwell but Oadby continued to threaten with Lynas King heading wide from a free kick and Armsden shooting over from Harry Allcock's cross. Dom Page put a header over for the hosts who took a 27th minute lead as Mapeo Mendes curled a free kick round the defensive wall into the bottom left hand corner.

Oadby fought back with Allcock just unable to reach an inviting Armsden cross and Kieran Henfrey turning the ball wide at the near post from a Pick corner. Page had a header ruled out for offside at the start of the second half before Kalon Peniasko found Henson who turned in the area only for Poachers keeper Charlie Andrews to take the ball off his toes. Henson was then wide from Wright's return pass, while at the other end Callum Steer shot over from King's lay off. Henson and Page combined to set up Wright whose shot was saved by Andrews and while many Oadby moves broke down in the last third they did have another chance to level, Allcock heading over after a great run and cross from Henfrey on the left.