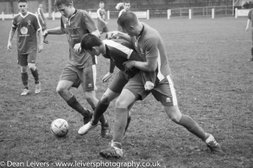 Oadby Town fell to a 3-1 defeat at home to Cogengoe United yesterday afternoon, with a disappointing performance in the pouring rain at Freeway Park resulting in the visitors leapfrogging the hosts in the bottom half of the United Counties League Premier Division.
It was a Michelin-starred display from the Cooks, as they opened the scoring from the penalty spot on 20 minutes before doubling their lead 10 minutes later. They added a third halfway through the second half before Oadby scored a consolation goal with quarter of an hour remaining, but it was too little too late.

In the opening minutes, a flurry of strong tackles and Cogenhoe attacks were a sign of things to come, with Cogenhoe striker and captain Ryan Dove twice being denied by Town stopper Charlie Andrews.With 15 minutes on the clock, Oadby, without influential winger Sam Burton following his leg break last weekend, had their first sight of goal with captain Callum Steer, playing in a wide position rather than his usual central midfield role in Burton’s absence, receiving a long diagonal ball from Tom Gamble and delivering a good cross, but Harry Alcock’s header was glanced just beyond the far post.

The Poachers were left to rue this glorious chance of taking the lead because just five minutes later the hosts fell behind. Cogenhoe right-back Munyaradzi Matiyenga’s drilled cross was adjudged to have been stopped deliberately by the arm of Lewis McLean and referee Daniel Todd pointed to the spot. Dove stepped up and fired his penalty in, with Andrews’ touch not enough to prevent the ball finding the net.

On the half hour mark, Cogenhoe made it 2-0 when a cross from the left was received by Dove, who simply controlled and turned in the area and was presented with a one-on-one situation with Andrews, and slotted past the ‘keeper for a second time. Question marks could well have been raised in regards to Oadby’s defending, though.

After the interval, Cogenhoe’s strike partnership of Dove and Matt Long continued to cause Oadby problems and midway through the second half, the ball broke in the middle of the field and was slipped through for Long to chase onto. Finding himself clean through with just Andrews to beat, he made no mistake and all but sealed the three points for the visitors. Oadby did get one back and may well have secured a lifeline five minutes later when a right-side corner was met by the rising Tom Bennett, who looped a header back across goal and into the corner of the net.

Alcock, who found himself isolated throughout the game, almost grabbed another which would have set up a nervy final 10 minutes for the Cooks, but he saw his snapshot well blocked by the defence. In reality, Bennett’s goal was simply too little, too late and Cogenhoe travelled back to Northampton with a well-earned victory. They appeared to be up for the fight from the very first whistle, won too many free challenges and suffocated their opposition with pressure. Oadby, meanwhile, did not hit the heights of recent weeks, struggling to cope with the Cogenhoe attack and unable to truly trouble their backline either, until it was too late.

Oadby’s man of the match, though, was centre-back Kieran Hefford, who marshalled the back four well throughout the game whilst making a series of vital interceptions, tackles and challenges which helped to keep the home side in the game – a quality performance in front of the hardy 79 fans in attendance at Freeway Park despite the dreadfully wet conditions.