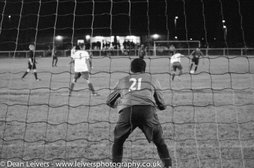 Poachers spoil the party as Nirvana are made to wait.

Oadby Town got back to winning ways at the expense of Leicester Nirvana who were looking for the perfect start in their first competitive fixture at their new ground Hamilton Park. The neutrals in the ground (and there were many to witness the occasion) will have been happy with what was an entertaining affair, though they would have been forgiven for thinking the evening was to turn out to be uneventful. The first twenty minutes were largely quiet, Nirvana having the best of the chances with a couple of shots being fired wide but ultimately not troubling the Oadby keeper.

It looked likely that a bit of luck might be required to break the deadlock and on twenty-three minutes luck turned in The Poachers favour when Tom Gamble picked up a loose ball on the edge of the Nirvana area. He did well to put in a low cross whilst under pressure and despite the best efforts of the Nirvana shot stopper the ball was parried into the path of a rushing Harry Allcock who fired in from close range.

Despite the goal the next ten minutes were nervy for Oadby though they did enough defensively to keep Nirvana at bay. Allcock did however find himself in enough space to potentially grab his second but didn’t manage to test the keeper, putting his shot wide of the target. Oadby found themselves on defensive duties for the rest of the half. Nirvana worked hard to create some good build up play but simply couldn’t find a way through, squandering two chances from set pieces and a chip that found its way over the top of Alpha Kallon but not into the beckoning Oadby goal.

Both teams started the second half in much the same way as the first, neither giving much away. Though five minutes after the break Carlton Beardmore found himself in space twenty-five yards out to the right of the Nirvana area. Unchallenged he let fly a wonderful low drive which sailed past the seemingly unsuspecting keeper who dived late to give him his fifth league goal of the season and Oadby’s second on the night.

At this point it looked like a done deal and that the Poachers would be certain of the three points. However Nirvana had other ideas and just three minutes after Beardmores brace they found themselves bearing down on the Oadby goal. A quick shot was dealt with well by Kallon as he dived low to his left but his efforts were not rewarded as the resulting rebound fell to Nirvana’s number nine Jordan Nelson who dispatched a quick shot to get a goal back for the home side.

Nirvana were gifted an excellent opportunity to draw level moments later when awarded a free kick on the edge of the Oadby area. A sigh of relief rose into the nights sky from the away supporters, as did the eventual shot which cleared the cross bar giving Kallon little to worry about. Oadby, beginning to come under a fair bit of pressure needed a goal to settle things down and on seventy minutes it looked like it might arrive. Allcock found himself in space on the left and after running at two defenders unleashed an effort just inside the area which found itself out of play for an Oadby corner. The corner kick was swung in close to the keeper who only managed to palm it onto the boot of Allcock who made no mistake this time around grabbing his second goal of the night.

With both teams cancelling each other out for the remaining minutes of the half Oadby looked certain to claim victory, however Nirvana were handed a life line on eighty-five minutes when a miscommunication between Woolfe and Kallon resulted in a rushed clearance by the Oadby keeper just outside of his area. The kick rebounded off Nelson who took advantage of the confusion and luckily for the Nirvana number nine the ball rebounded into an empty Oadby goal.

Buoyed by the slice of good fortune and hungry for an equaliser Nirvana pressed for the final five minutes and into the four added for stoppages. Oadby, seemingly happy to invite attacks dug in and managed to do enough to keep Nirvana at bay as they saw Nelson miss a chance for a hat trick, shooting high in injury time. Whilst another set piece by Nirvana came to nothing as the Poachers defence created enough pressure to force a shot well wide of the mark.

Despite the win Oadby still lie in eighteenth in the UCL but the three points undoubtedly put pressure on teams below whilst giving the Poachers a bit of breathing space as Kirby and Harrowby still have games in hand. A good result at home to Harborough on Boxing Day would help to keep applying pressure on those teams around them.