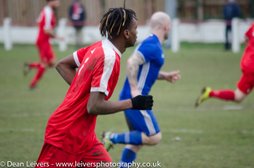 Oadby Town suffered a 6-0 defeat in the bitter cold at home to league leaders Peterborough Sports, who themselves remain top of the United Counties League Premier Division. The away side led 2-0 at the break but their quality and dominance prevailed in the second half, with a further four goals, including a hat-trick from Avelino Vieira, securing a resounding victory.

Peterborough Sports started well and showed why they are top of the league, pressurising the Oadby back line from the first whistle and creating a couple of early openings. With just eight minutes on the clock, the visitors took the lead; Callum Steer gave the ball away in midfield and was punished as striker Stuart Eason was slipped in. Faced one-on-one with 16-year-old Town goalkeeper Sam Lomax, Eason’s effort was blocked by the foot of the ‘keeper, spinning it upwards. The 6’8” goalkeeper was extremely unlucky in his attempt to scramble the ball away, inadvertently pushing into the top corner as he tried to desperately claw it to safety. Oadby continued to struggle against a well-organised Peterborough Sports side, creating a couple of slight half-chances but nothing of real note. The visitors exploited the right channel and left wing to great effect, with winger Joshua Moreman proving a genuine handful for Oadby right-back Ben Taylor. After more chances for Eason, Peterborough Sports doubled their lead shortly after the half-hour mark. Moreman made good headway down the left before the ball broke out to the right wing, where Jordan Macleod delivered an accurate cross for Eason to control and turn. The striker then released a venomous strike from 10 yards; again, Lomax was again unfortunate as his decent hand on the ball was not enough to prevent the ball finding the net again. Lomax, though, did not let his head drop and denied the visitors from scoring a third as he made a magnificent, reflex save to tip over another powerful snapshot from Eason.

Conceding the second goal seemed to be the spark the Poachers needed to put up a fight, with midfielders Callum Steer and Jordan Pick both seeing strikes fly just over Lewis Moat’s crossbar. After the interval, Oadby started well but were undone by a combination of sloppy play and a clinical Peterborough Sports side as Pick’s heavy touch was capitalised upon by the Peterborough midfield. The ball was crossed to the back post, where Moreman nodded down to Vieira; the striker found himself just a few yards out and tucked the ball home with 55 minutes on the clock. A forceful challenge on Nuno Gomes forced the exciting Oadby winger off but not before Peterborough Sports made it 0-4 with little over an hour played. Moreman scored the goal his performance thoroughly deserved as he picked the ball up on the left flank before using his pace and trickery to cut in, work some space on the edge of the area and unleash a fine drive past the helpless Lomax. Peterborough Sports had a few more opportunities to further increase their lead, whilst Oadby continued to struggle to create any chances that genuinely troubled Moat’s goal. Vieira made it 0-5 after a great piece of skill down the right channel, mixing in a series of quick-fire step-overs before firing an unstoppable effort into the back of the net. The physical striker, who posed great strength and speed throughout, then completed the scoring for the away side and his hat-trick in injury time. Vieira was slipped through and found himself with just the isolated Lomax to beat, taking the ball round the keeper and slotting in from a narrow angle.

It was certainly not a poor performance from Oadby, who did not let their heads drop and put in a cracking shift for the 109 spectators.
It was a case of the home side being outclassed by a very good team who, barring any freak and drastic changes in form, look destined to win the league by some distance, with the six goals bumping up their goal difference to a whopping +84 from 27 games. The result leaves Oadby on 26 points from their 30 games, suffering their eighth home defeat of the season at the hands of the worthy league leaders.

Oadby’s Man of the Match: Sam Lomax – the young goalkeeper cannot be held liable for any of the goals, but kept the score-line respectable with a series of fine saves, including the outstanding tip over the bar shortly before half-time.