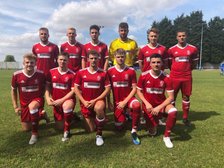 An unseasonably warm day greeted this UCL fixture. The pitch at The dog and Duck showing signs of wear of having both The Doughmen and AFC Rushden & Diamonds playing on it. It was a bit like quicksand in the middle and in the goalmouths! The first few minutes of the game were rather frantic as both sides struggled to acclimatise to the condition of the pitch and the first effort of note came from Oadby as Callum steer shot from 25 yards and the keeper Oliver Reynolds did well to push it behind for a corner. On 11 minutes, there was much mirth from the main stand as we ran out of match balls after a few large clearances and played the next few minutes with an orange training ball – clearly not to the liking of Poachers young keeper Sam Lomax who dropped an easy catch at the feet of Devon Ellwood, but his shot was cleared off the line by an Oadby defender to spare Lomax’s blushes. Oadby continued to press and created another good chance on 18 minutes when an Alcock cross was met by Beardmore but Reynolds produced another good save from the striker’s close range snap shot. On 21 minutes the dangerous looking Nuno Gomez shot over.

Full back Jake Gillingwater got forward well for Wellingborough on 26 minutes and his shot was well blocked by Lomax. Shortly after Nathan Wills shot wide from a free kick for The Doughmen. The game continued to be very even and end to end, without much quality as Beardmore shot over for Oadby and Wiesniewski missed a free header from an Ellwood cross for Boro’. The first real quality in the game came on 40 minutes when good one touch football between Beardmore, Alcock and Gomez resulted in the ball falling for Jordan Pick, who was unable to control his volley sufficiently and it went over the crossbar. Just as it looked like the game would get to half time at 0-0 Boro’s Barry Deacon took the ball evaded two challenges and drilled the ball into the bottom left corner of Lomax’s net.

The second half started brightly for Oadby as Jordan Pick had a couple of efforts go over the bar when cutting in from the left flank. Harry Alcock then had a couple of chances – A header from a corner, which he couldn’t get sufficient power on and a shot wide from the right of the penalty box. Oadby were left to rue their missed chances on 72 minutes when Deacon waltzed round two defenders to finish well and put The Doughmen 2-0 up and capture his second of the game. Tom Bennett replaced Ben Taylor shortly afterwards, in an attempt to push forward more and he had three attempts thwarted in two minutes, when a shot from a tight angle was well saved by Reynolds. From the resulting corner a similar shot was again well saved, and from that corner a Bennett header was again saved by Reynolds.
With Oadby tiring after the second goal and searching for a goal to get themselves back in the game, they were left a little exposed by the fresh legs of sub Jeremiah Adams in the 84th minute who scored a third for Boro’ and effectively ended the game as a spectacle. After that the game drifted to its conclusion without further goalmouth incident.

The young poachers could feel a little hard done by with the scoreline and manager Dave Clay had a point when he said afterwards that it never looked a 3-0 game but Oadby were their own worst enemies today as they missed some good chances in the game.