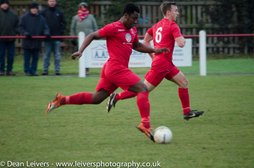 Oadby suffered their fourth defeat in five league games in what turned out to be an unlucky afternoon for the home side. Both sides looked evenly matched in the first half although the 0-0 score line at the break was somewhat surprising given some of the chances in the first forty-five minutes. The Poachers had the first chance to draw blood ten minutes in after some lovely build up play between Thandi and Alcock who found Tom Gamble in space, his shot ultimately coming to nothing.

At the other end Yaxley’s Dan Cotton had two opportunities to get on the score sheet. Firstly doing well to keep possession during a good run into the heart of the Oadby defence but despite getting a decent shot away under pressure Tom Hubbard was more than a match for it. He also saw a headed effort well saved as Hubbard dived low to his right to keep the scores level. The Poachers best chance of the half saw Lamar Parkes break out of midfield with good pace to set up a one on one with the keeper, Yaxley’s Ollie Sutton making a good save with his legs to deny the Oadby number ten.

The last two key chances of the first half fell to Yaxley who would have been left wondering how they were going into the break without a goal. On 35 minutes Matt Sparrow put in a good cross that rose above the Oadby defence and found Stebbings who could only watch his well hit effort bounce onto the post and get hastily cleared. Ten minutes later Yaxley were gifted the opportunity of the half. Josh Pike managed a great cross after a sound bit of build up play on the wing, which Hubbard could only manage to get a hand on, pushing the ball to the feet of Yaxleys Stebbings who bizarrely managed to fire over the bar from eight yards out.

Supporters would have been forgiven for thinking that they might be about to witness a goalless draw and the opening to the second half started in much the same vain as the first. However Yaxley were first to break the deadlock, the Oadby defence giving Dan Cotton too much time and space to get himself in a great position to hit a powerful shot on the angle that sailed past Hubbard in the Oadby goal. The Poachers heads didn’t go down though and Aniyah King looked to make something happen ten minutes later after making a brilliant run down the left, however he was cut short after a poor tackle by Yaxleys Pike. The resulting free kick easily being dealt with by the Yaxley defence.

It was in fact a free kick that would lead to Yaxleys second of the afternoon. Dan Cotton lofted a high ball into the box which gave rise to a good shot on target, Tom Hubbard managing to keep the shot out but unfortunately the rebound fell outside the penalty area into the path of Liam Hook who made no mistake in punishing Oadby who had been enjoying a good spell of pressure.

Oadby continued to press and search for a goal confident that they could take something from the game. The final fifteen minutes saw Oadby bring on Siraj Patel who began to cause Yaxley problems on the wing and also Carlton Beardmore who would score what would ultimately be Oadby’s only goal of the game. Beardmore had begun to create decent plays from the midfield and with just over ten minutes to go found himself on the end of a low Tom Gamble cross, which he slotted home after making a good run into the penalty area. It was a just reward for the Poachers who had worked hard to stay in the game and now really did look like they could nick a point in the fading minutes of the second half.

However it was not to be, with an eventful final five minutes playing into the hands of the visitors. The Poachers found themselves down to ten men on eighty-five minutes after a mistimed challenge by Thandi saw the ref reach for the red card. An unfortunate decision given the good tempered mood of the game. Oadby had chances to clinch the draw, Kieron Hefford’s late shot sailing over the bar, the result of the ball making an untimely bobble before the strike. Also Gamble again with an assist to set up a long range effort by Hawker who’s on target shot was met well by Sutton in the Yaxley goal. It was to be Yaxleys afternoon and they made sure of the three points with the last kick of the game. Once again a free kick undoing the Poachers. Cottons well taken set piece was seemingly kept out by Hubbard who pushed the shot upward onto the bar but the referee and his assistant awarded a goal and nailed shut any window of opportunity for Oadby.

The defeat leaves Oadby still sitting at the bottom of the table but with plenty of games in hand time is still on their side. There should be lots of opportunities to move themselves away from relegation over the coming weeks.