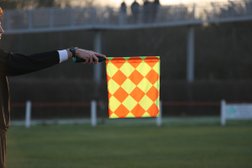 On a warm October evening, the mood at Freeway Park certainly seemed relaxed heading into the midweek clash against ON Chenecks. The 100 strong crowd mostly chatting about the recent thumpings being develivered by The Poachers since the FA Vase clash with Dunkirk.

And Oadby did not disappoint this evening, and came running straight out of the blocks with an attacking game. Stevenson gaining the opening chance of the match, but the ball went sailing over the crossbar.

The Poachers maintain pressure on the opposition's goal and a fine run down the left flank saw the ball pinged in the Cheneck box, but the shot was fluffed but, thankfully, the rebound fell to the feet of Pradeep Bahrey who slotted the ball home. The Northampton defence appealed for offside, but the flag stayed down. After an entertaining opening 15 minutes, Oadby were 1-0 up.

Chenecks, who are not know for rolling over in defeat, looked like they might get back in the game with a very close chance from a corner. However, the ball quickly made its way back up the pitch resulting in two very good attempts on goal by Jon Stevenson and Jake Duffy, which were only kept out by some confident goalkeeping.

The 'keepers luck was bound to run out soon, and run out it did as Cameron Powell doubled the home lead after 29 minutes. Then straight from the Cheneck kick-off Oadby regained posetions and a lovely run from Jon Steveon almost saw, by a very narrow margin, two goals in one minute. From here on the match was Oadby's.

Stevenson finally got his deserved goal just after the half-time break and super-sub Livo Dube scored with his first touch on the hour mark. The fifth coming from Joe French.

The Chenecks managed a consolation goal, a superb shot drilling into the top left, which sparked the home back into action as Courtney Meade restored the five goal margin in the next minute.

Manager, Jeff Stocking, commented that he thought it was “Another great performance by the squad, and the squad look like they are jelling together. All over the park everyone seems like they are playing like they are enjoying it and playing out of there skins. I thought Chenecks worked very hard tonight but we seemed to pass and move very well tonight...Very difficult to mention players individually at the minute as whole squad is doing well, but a special mention to both Jake Duffy and Jon Stevenson you are both getting very close!"