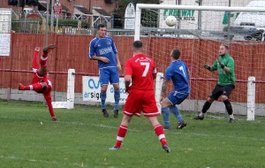 From the outset it never looked as though this was going to be a closely fought match. A run for 15 consecutive passes resulted in Courtney Meade opening the scoring with a lovely break through the defence and then a cool finish. Jon Stevenson had a couple of good chances on goal, including a wonderful over-the-head kick which was blocked by the Thrapston goalkeeper, but managed to hit the back of the net a couple of minutes before half time.

Despite the goal line being only 2-0 heading into the break, Oadby were dominating and it was all over as a contest.

Soon after the break, Meade scored his second of the match and then a stunning free kick from Jake Duffy made it 4-0. Only two minutes later, Thrapo's lack of marking Duffy resulted in another Oadby goal. As the ball feel to his feet, Jake spotting the Thrapston keeper was off his line lobbed the ball over his head to plop in into the back of the net.

These two contenders for goal of the match were surpassed by a screamer from Thrapston's Adam Loake who gained a consolation goal in the last few minutes of the match.