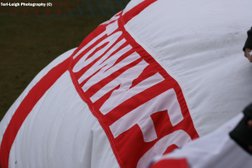 Another convincing win for The Poachers...

Once again Oadby put in a commanding performance in the league. Jon Stevenson opened the scoring after only nine minutes as he slotted the ball home from a couple of yards away, and then the travelling support only had to wait another six minutes before Courtney Meade doubled the score.

Oadby were using their pace to really place pressure on the Bugbrooke backline, with Stevenson making their defence look like a slice of Swiss Cheese. However, it was not only the Bugbrooke defenders that were struggling to keep up with the Oadby attack, as the linesman also struggled to maintain on top of the game, and gave four very poor offside decisions, which looked like almost certain goal scoring opportunities for Meade and Stevenson.

Jake Duffy played yet another great performance in the midfield and scored a well deserved goal on the half hour.

As the match seemed to take on a quasi-friendly feel to proceedings, it was just non-stop attack from Oadby. Levi Porter coming close with a one-on-one with the Bugbrooke 'keeper, with the ball unfortunately falling at his weaker foot for the shot. Meade also had a couple of powerful shots deflected by the opposition 'keeper - who was having a fantastic match and was the only factor in preventing Bugbrooke from an extremely humiliating scoreline.

Meade kept on the pressure and scored his second seven minutes before the break.

The goal of the game came seven minutes into the second half. With Bugbrooke's Adam Frost receiving the ball, a light touch to control it and then launched an absolute screamer... into his own goal, leaving the goalie with little chance of stopping it. 0-5.

A Stevenson penalty, his 16th goal of the season, increased the Poachers advantage to six on the hour; with Meade completing his hat-trick, and goal number seven, on 75 minutes.

Rob Morgan, who has been putting in some solid footballing displays recently, rounded off the goalfest five minutes from time, to the joy of the visiting fans.

A late penatly in the 88th minute from a mistimed tackle allowed Bugbrooke a consolation goal.

Credit to the Bugbrooke goalkeeper, who normally plays outfield, who pulled off some lovely saves to stop the scoreline from hitting double figures.

Oadby looked very comfortable this evening, with a few new, and young, players making impressive débuts - all looking very good for the trip to Alvechurch on Saturday.