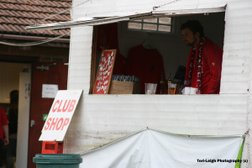 The Blackstones certainly did not look like a team that was in the bottom half of the division and came to Freeway Park looking to cause an upset. With their celebrations after the final whistle I believe they felt they had acheived just that.

The Poachers had the best early chances on goal, with three early attempts to open the scoring, but were denied once by the linesman's flag and a rattling of the post.

The Blackstones didn't let their head drop, and were soon up the home end with their own visions of goals. A nerve wrecking attempt blocked with some brilliant defending by Jack Lane and then a second attempt which looked destined for a one-on-one with the 'keeper subdued with off-side being called.

Once again it was Courtney Meade who found the back of the net for Oadby, after receiving a pass just outside the Blackstone's box and an artful flick of the chest and 180 degree turn to plant the ball across the goal and into the lefthand side of the net.

Courtney did not hang around for long to double the lead, finding himself in a similar position only two minutes later slotted the ball home in the very right corner of the goal, with the Blackstone's goalkeeper unable to react quick enough to get a hand to it.

The lead seemed to settle the Poacher down a little, who began to pass it around with much more ease and act more like the team at the top of the table. Three more goal scoring opportunities quick arose, with Eddie Appleton heading wide a drilled corner and Dube unable to keep his header down as it glanced over the crossbar.

However, just before the half-time break and crucial turning point came in the match, a shot launched from 30 yards from a Blackstones player pinged the underside of the Oadby crossbar, flew downwards before bouncing out. However, the referee deemed the entire ball to have crossed the line and Blackstones were back in the game.

The second half was extremely frustrating for the Oadby fans. The Poachers putting in the hard work to get into goal scoring positions but unable to finish the job, with shots spraying wide or blacked by opposing defenders. Substitute Liam Canavan having the best chance of the match with a cross into the box leaving him with a near open goal to aim at, but heading it wide for a goal kick.

Notable performance was put in by the returning Callum Earls, with one run managing to beat three players before a late tackle denied his chance of restoring the two goal lead.

As the game drew on the referee seemed to be letting harder and harder challenges go without any reprisal, which suited the Blackstone physical style of football. Then eventually, against the run of play Blackstones managed to level the scores and the fought of all Oadby's chances of reclaiming victory.