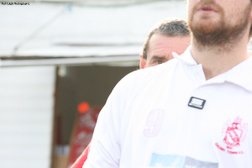 Irchester hold The Poachers to a draw...

After conceding fourteen goals in two previous meetings with Oadby this season, Irchester showed great character to hold the tabletoppers who now have a ten point advantage at the head of the table.

Oadby equalised after fifteen minutes with number 28 of the season from the division's leading scorer Courtney Meade.

It looked like normal service had resumed when Jon Stevenson's 23rd goal of the season put the visitors ahead two minutes into the second half.

Irchester stuck to the task though and were rewarded by a last minute equaliser from Boddington.

Oadby Town Manager, Jeff Stocking commented after the game that “a trip to Irchester was never going to be easy after playing them a few weeks ago at home and winning 9-0. We knew it wouldn't be that easy and how right we were. After 17 seconds to be honest we could and probably should have been 1 up and that was the way the day was going to go. With a lot of chances missed throughout the game. But massive credit to Irchester who worked and harried all game and got a equaliser with seconds to go in injury time. But as the saying goes you can't win them all. And a point away is another point closer to promotion. Anyway hopefully shooting boots back on for Wednesday night when we travel to Thrapston.”