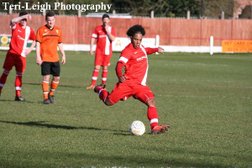 Rushden hold The Poachers to a draw...

A very disappointing result for Oadby as put a tiny dent in their pursuit for the title.

The game started off on a poor foot as Rushden opened the scoring with a 30 yard howler, which took everybody up surprise. As fans were still shuffling around the ground for their seats, adding a splash of milk to their tea and buying an obligatory raffle ticket, Rushden's Darren Farrar decided to have a punt on goal. As the ball hurled through the air, Oadby's 'keeper Luck Pickering looking as though he though it was heading wide, the ball landed in the back of the net. Thankfully Rushden manage to attrack some travelling support, whose cheering was the only way many of the Oadby fans realised the visitors had pulled ahead. Was the first sign that thing might not go Oadby's was this afternoon.

For a team that are mid-table, Rushden certainly gave The Poachers a game, with their defensive line successfully closing down on Julian Joachim, and only allowing him one attempt on goal, a soft push at the ball, which went wide.

Thankfully, just before half time, Jon Stevenson pinged in a free kick into the Rushden box for Cameron Powell to launch at it with a diving headed and land the ball firmly in the goal. HT 1-1.

Oadby certainly came out stronger in the second half, but Rushden seemed determined to come away from Freeway Park with a draw. However, ten minutes after the break Jon Steveson reminded us why he will go down as an Oadby legend, with a whirlwind of a shot that curled into the Rushden goal at a pace that would set off nearby speed cameras on the A6.

Things looked like they were getting back to normal, and Oadby Choir were back in fine voice.

With only nine minutes to go of the game, Oadby looked vulnerable, and a scrabble in the box lead to the Rushden equaliser, and The Poacher never looked like getting back into the match.

Pre-game, a picture with "seven points to go" was making the rounds on Facebook, so nothing has changed for the promotion hopes. Two wins from the next two games will ensure Oadby Step 5 football next season. Having got to know Jeff Stocking and his management team over the past few years, they will certainly be taking lessons away from todays game and hopefully turn things around as they visit Rushden next weekend.