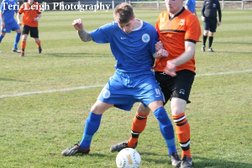 Oadby seal the deal at Rushden...

This time last year was the beginning of the decline for The Poachers, as a defeat at Rushden & Higham started the rot which lead to Oadby losing out on promotion. Thankfully there was a different outcome today, although it was not always that way!

The first half was a very even affair, with Rushden threatening the Oadby goal a number of times. Their biggest chance at opening the scoring came from a free-kick just outside of the box. A great kick, only stopped by a superb save from Luke Pickering, who's diving efforts managed to prevent The Poachers from going into the game 1-0 down.

Oadby had their chances in the first half, but were unable to convert any and the game was looking like it was heading towards another draw.

Changes were made in the second half as Theo Brown replaced Calm Earls, who was suffering from a cold, and injected a bit of spark into the wing.

The travelling support were made to wait until the 75th minute until Jake Duffy fired home the opening goal and changed the flow of the match.

With a goal on the scoresheet, Oadby seemed to relax and play a much more fluid style of football, and could have doubled the score, but two shots just going wide of the goal.

A minute into added time came the kick that finished off the match. Rushden conceded a penalty and Jon Stevenson slotted the ball home to earn Oadby the three points.

As Oadby head towards the next fixture, a win will seal promotion with such a superior goal difference.

Assitant Manager, Paul Appleton, commented after the game that "After an anxious 2-2 draw the previous week, yesterday's game against a strong/spirited and committed Rushden & Higham side was always going to be a test of our metal.

Yesterday certainly answered a few questions on whether we had what it takes to get over the line.

It definitely wasn't pretty especially first half against the wind with our keeper Luke Pickering pulling off two cracking saves and our own final end product mostly wasteful, as both sides toiled to master the hard surface.

Our superior possession/control and constant probing second half gave us a solid basis to work off and a quality finish from Jake Duffy (just when it looked like total frustration was setting in) relieved the tension
somewhat.

A last minute Jon Stevenson penalty after a foul on Jake Duffy rounded things off.

Undoubtedly a big three points in our push for promotion. Next up Peterborough Sports away and another tough game expected if their 2-1 defeat to us back at the beginning of September was anything to go by."