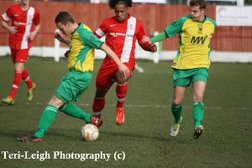 Oadby reafirm their place at the top of the table...

After a long wet winter, the sunshine shone on Freeway Park and a bright performance from The Poachers ensure the home fans went home smiling.

Considering that only down the road in Leicester was a FA Vase Quarter Final match, Freeway Park saw a decent attendance of over 140, and the crowd were treated to an exciting opening quarter of an hour.

As the match started, it looked like it was going to be a hard contested battle between the team at the top of the division and another who had ot lost a game in six fixtures. However, the end-to-end play was quickly put to a halt by captain Jack Duffy who thundered in two quick goals on nine minutes and eleven. The second was surely a contender for goal of the season.

A the cross was fired in from the left-hand side of the goal, a quick lay off and then two dummies allowed Duffy to roar in from the edge of the box and curve a beautiful shot into the corner of the next, which even Yaya Toure would have been proud of.

With the match completely flipped on its head, Oadby now dominated the match, with Jon Stevenson coming ever so close on a number of occasions.

The second half was rather subdued affair, with The Poachers going through the motions to ensure the cleansheet and the three points.

An own goal six minutes from time by a Jacob Gartland finished the game off.