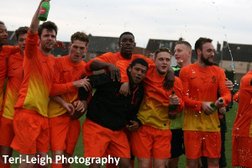 Spencer certainly made it hard for Oadby and did all they could to prevent The Poachers from scoring.

Despite Oadby dominating possesions and having numerous attempts on goal, the home side vertually had ten men behind the ball and seemed intent on coming away from the game with a clean sheet and a point. Oadby had a number of chances to open the scoring but prevented by some spectacular saves by Spencer's goalkeeper.

The deadlock was not broken until the 89th minute by a 20 yard screamer from Jack Lane, who was later booked from taking his shirt of during the celebrations.

Speaking after the match, manager, Jeff Stocking commented that "we are there and what a goal and what a performance. The lads kept battling all the way through the game and it was the 89min before we broke the dead lock with a worldy. Well done to Spencer, they set their stall out and did well to be fair . Well onwards to our next game which will be very tough to Harrowby at home."