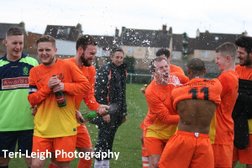 Oadby seal promotion back to Step 5!

The first half was very nervy for the travelling supporters as despite Oadby maintaining the majority of possession and creating a number of chances they could not seem to score. Meanwhile, Peterborough Sports were looking like they could threaten to score at any moment.

Jeff Stocking's talking to the players on the pitch during the break had the desired effect, as only four minutes after the restart Lee Dube put The Poachers ahead.

A missed penalty from Jack Lane looked as if it might have proven very costly as Sports equalised on 64 minutes. Thankfully Jake Duffy managed to regain the lead only three minutes later.

With only three minutes left of the match, Lee Dube fired another goal home and made sure the result was in Oadby's favour, with Duffy scoring again during injury time to make sure the promotion well and truly happened.

With five games left of the season, Oadby need just a point to become title winners.