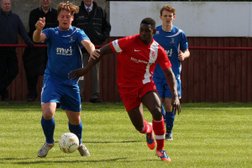 With one game to go Oadby need five more goals to match the record for goals scored in a season.

They kicked off the Easter programme with a nap hand against the Royals.

Dube scored his second nine minutes before half time.

After the match Jeff Stocking commented that "the season is coming to a close with just one more game left on Monday as a local derby at home to Lutterworth. Yesterday we hosted Potton who actually came and very much tried to play and it was a cracking game of football, we actually should have been a goal down within a minute except for a cracking save by our goal keeper Luke Pickering. I mixed our squad up and only had 3 players playing were over 21. And I must say our youngsters didn't disappoint with a hatrick from Lee Anderson a tremendous goal from Jack Lane and one from Julian Joachim Special mention goes to Liam Prescott and Luke Brighty just 17 years old and quality performances.”