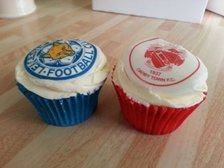 Another record broken! A fitting end to a fine season...

t was a record breaking day for the Poachers as they set a new league points record of 109, overhauling Long Buckby's Premier best set two seasons ago.

Oadby dis miss out on another record, their final goal tally for the season of 159 one short of St Neots' tally set in 2010-11.

Late goals from Livo Dube on 79 minutes and Luke Dalby on 85 gave Oadby a comfortable win as they completed the campaign unbeaten at Freeways Park.

After the match, Jeff Stocking commented "that's it from us guys and what a great season we have had and finished with a 4-0 at home to Lutterworth. The lads have been brilliant this season that have pretty much come from scratch only 4 players were here last season and the balance of youth and experience have blended very well together. A massive thank you to the committee for giving me opportunity and believing in what I said at the start of the season. A big thank you to the supporters that have got behind the team and attendances have got better and better towards the end of the season. Also a big thank you to all our staff in the kitchen for the best grub after a game in the league . And a massive thanks to my management team we knew we could do it . So here's to it well done all of you. And here's to next season let's all pull together and see where it goes.”

Cupcakes thanks to Cupcake Creations MK, for more info check out - http://www.mkweb.co.uk/Food-and-Drink/Milton-Keynes-business-is-a-piece-of-cake-20140206114554.htm