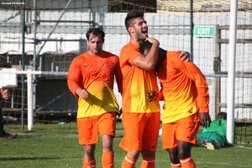 Oadby cruise to the next round of the FA Vase...

During the opening twenty minutes it look as though this FA Vase draw against Step 5 Dunkirk had a nil, nil draw all over it. Each team was relentlessly pushing against each other in what looked like a quite physical encounter. However, on the twenty sixth minute Jon Stevenson broke through the Dunkirk defense in an extremely well timed attack and slotted the ball in the back of the net, giving The Poachers the opening lead.

The goal quickly transformed the match. Oadby went on to dominate the game, constantly making challenges on the Dunkirk goal, as it wasn't long before Stevenson set another goal up, this time with Dube hammering the ball home.

A dubious penalty was given against Dunkirk, although the decision far from warranted the sexist comments from the home support towards the lineswoman, which Stevenson hit wide of the target and denied Oadby the opportunity to head into half-time with a three goal lead.

The opening of the second half saw a much more determined effort from Dunkirk, who had a shot rattle the Oadby crossbar in the opening few minutes. However, their efforts to physically put Oadby out of the game came to little avail as Stevenson hit (over his head) a fine cross to allow Dube his second goal of the match to make the it of Dunkirk's grasp.

An unfortunate error from 'keeper Luke Pritchard, for a hand ball outside of the area led to a red card; and man of the match Dube filled into goalkeeping duties for the final few minutes, managing to pull off a confidence save from a Dunkirk free kick.

The performance certainly showed the Oadby have what is takes against higher league opposition and hopefully will bode well not only for the next round but also the long league campaign ahead.