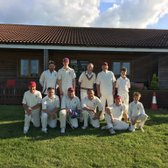 A result at last

The post-mortem for the last matches pitch revealed that we would not allow slitting of the square next spring. The prep for this game included Al and Dave on their bended knees sqeezing loam into the cracks like polyfilla along with prolonged rolling. Testing revealed a hard and true pitch ready for run-scoring. Was this true?
Capt Tim won the toss and elected to bat. Some Helliwells came out to open to face one of Tolethorpes new stars Zoe Wilson. She bowled from a low height with nagging accuracy, Ford at the other end was steady. Progress was gentle with none of the usual sixes from either Helliwell. Zoe's twin sister Sophie bowled the same and was treated with similar respect (so similar were the Lady Bowlers they ended up with identical analyses). Suddenly the watching crowd were stunned to see W Helliwell return to the batting chairs - he'd been retired by his captain - after all he had, by now hit 3 sixes. Not long after brother Tom was forced from the crease. Grumbling was not heard. Sam-the-younger-Gibert showed us some elegant shots and some lusty blows before administering insufficient force to a ball from the oh-so-slow Bullimore. Hulme hit more lusty blows than his pupil before Bullimore bowled the slow, straight one which had an appointment to arrive at the crease later that afternoon. Bowled. Sam the younger Bullement also struggled with the slow bowling and fell to Tedbury the turncoat, caught by Capt Digby while falling. Said Capt had by now bowled several steady overs with occasional bursts of great excitement. No-one really knew why.
It was noteworthy that all the wickets fell to the slow bowling twins of Bullimore and Tedbury. Ah well.
Tea was taken in the now customary widespread fashion of the time and Baboons felt content that they had scored enough. The pitch was generally agreed to be an improvment on the previous one.
Tolethorpe's innings started as carefully as Baboons' but soon the tall and agressive T Helliwell struck - a tickle being expertly snaffled by Guinness. This introduced the first of the Lady Batters who soon showed us why she was playing with some elegant shots including a pacy ball directed onto the chest of Stratford to cries of "ouch" and "catch it!" The latter did not happen. More was promised but progess was not to be made - nicely run out by sharp fielding from Lucas responding to an ambitious call from her Captain. The same fate for the same reason soon befell her twin, sadly, without scoring at all - this time an excellent throw from Coyle. J Helliwell kept the runs in check and something amusing happened round about now but amnesia has set in and the record has been lost. Enrights struggled to lay bat on ball then turncoat T showed them how to to do it despite some ferociously pacey and accurate bowling from Blake. Around this time more batsmen were dismissed - probably by run outs. A record has not been kept. The scorer was probably eating ice cream. At least all the overs had been used although the result was never really in doubt.
So exciting was the match that wonderful new changing rooms have not yet been celebrated - they have now; and the two intervals for rain have been unremarked, until now.
A victory for Baboons.
Baboons were particularly impressed by the performance of the junior and not-so-junior members of the squad - great enthusiasm and a marked improvement in the fielding were noted - augurs well for the future.
Share via
FacebookTwitter
https://www.pitchero.com/clubs
Recent news