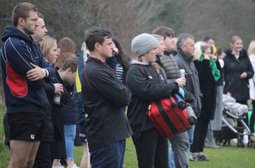 Coach Josh Waley runs the rule under a league-winning season to remember.

I would like to start this report by highlighting a few names whose efforts, as I am sure you will agree, have been of considerable importance in the building of our successful 2019-2020 season.

First up, thanks to skipper Ben Pearce – I think of Ben as a ‘Chris Robshaw’ style captain; not a magician with words, but a man who leads by example, and he has stepped up as captain with extraordinary ease. He sets the standard on the pitch, both during matches and at training (mostly), and his ability to herd this group of men to the extremities of the Earth (namely Cranleigh) is admirable. Ben, you are leading this club in an exciting direction and I take my hat off to you.

Next is Jamie Reid – a Clubman through and through. Jamie has stuck with this side through thick and thin (namely last season), running poorly attended training sessions with gusto and providing leadership both on and off the field. As I know many of you will agree, Jamie has done a terrific job of coaching and managing this side over the last couple years, and it is great to be working alongside him now.

Now to the season.

The OAs lost one game this season, and it was our first – a gritty, unimpressive performance against Old Ruts. After this sharp kick up the rear, we proceeded to win the following 15 games on the spin, our final two postponed, finishing top of the league with 73 points and 12 bonus points out of a possible 16. A commendable season, congratulations to all those who donned the red and black shirt this year. A special mention for Will Shepherd, our top try scorer this season with 18, and to top points scorer Jamie Reid (sorry to have to mention him again) with his total of 94 points, including 6 tries. Well done lads, and well done all of you – you should be very proud.

The success of our 2019-2020 season can be broadly boiled down to a few key factors. The first is the team’s dedication to training. Now, I know how boring it must get receiving an email every Monday telling you to get down to Battersea Park on a Wednesday and how important those sessions are to our success. But the proof is in the pudding. We’ve gone from a side who scrambles together six lads on a Wednesday to run a couple drills and play some touch, to a team that knows places in the starting XV on a Saturday are competed for, and the way to make sure you’re in the squad is to be there on Wednesday. We’ve had days where we are running separate sessions with backs and forwards, coming together for team runs, still with players available to hold pads! I know how much of a pain it is to get out of the office on time and get across to Battersea, especially when you don’t live in SW but it is only one night a week – so please continue to make that effort, it makes match days all that bit smoother. We want to see that same dedication carried forward into the 2020-2021 season, starting with pre-season at the end of August (details to follow).

The second factor I’d like to highlight is the structure we have developed both in the forwards and across the backline. I recall a match report early in the season penned by former coach and self-proclaimed inventor of train beers, which made mention of our makeshift backlines. As a by-product of training regularly, combined with the regular availability of new players alongside existing ones, we have made these a thing of the past, and have been able to create and develop a regular framework that held shape throughout the majority of the season. From a coaching and a planning perspective, it makes life a lot easier to know that the same players are available and keen to play, in the back row, centres, back three – wherever it may be – week in week out, giving a much needed rhythm to our game. Long may this continue.

A final key factor worth noting in the success of this season has been the re-stocking of our player roster and player recruitment. There have been several new faces come into the fold this season, many of whom we have seen down on a Saturday on a regular basis. Both OAs and non-OAs, we are very glad to have you – your impact has been felt and we are grateful. Recruitment plays an important role again as we head towards next season. As always, we are looking for props and utility backs, particularly in the back three. Please bear this in mind as pubs reopen this summer (we can dream, at least), and if any mates give a signal that they are keen, let them know about the OARFC. I know both Jamie and Hardy will be much obliged.

Despite finishing the season with the most points, we did not finish the season with the highest points difference, nor did we have the most bonus points. Old Ruts scored more and conceded less, including against us. That last game scheduled for the 28 March would have been the true test to our team and our season. I await with heightened anticipation for our return fixture against them next season, and I am sure this will be reciprocated. Why this discrepancy on points? I think it is because simply, we were not fit enough. I truly believe that at our best, we have one of the most powerful packs and threatening backlines in the South West. This was echoed by none other than the French international and rugby legend Serge Betsen, during our crushing victory over Bec Old Boys in the horizontal wind and rain earlier this year. And our defence, when on form, is a beauty to behold. Aggressive, powerful and consistent. This gives us no excuse, therefore, to have conceded the number of points that we did, and this, alongside player fitness, will be something I’ll be monitoring closely next season.

I will be sending out details for pre-season dates over the next week, so make sure they are locked in your diary. I am looking forward to seeing everyone back in excellent nick after a summer of Joe Wicks workouts in the sitting room.