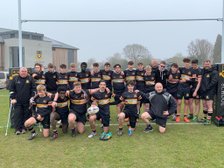 The Land That Time Forgot

Despite the score card showing a win to Chipstead, few of the spectators would have been too comfortable with the result.

Nobody wants to see a good game of rugby come to an end, but a second half just short of 50 minutes in a youth match is preposterous! And before you ask, it was not time added on for injury or a heard of wilder beast heading towards Serrengetti.....it was an phenomena of timekeeping.

The nerves are still a little raw as a result of the outcome of this match, so the report will be of the abbreviated variety.

The local derby between Cats U16 and Chipstead was always going to be a tense affair but I am sure that Chipstead entered the arena confident that their standing in a league above Cats would hold them in good stead, along with the fact that closed season had seen them acquire one of Cats U16 favorite sons!

The first half was stalemate at 0-0, but the rugby was far from stale, attack was met with sterling defense from both sides, but Cats were unable to take advantage of the hill.