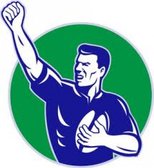 On a very hot day this turned out to be a very good pre season fixture for Old Cents and the hosts Moseley Oak.
Both sets of players have to be applauded for a very entertaining game in sweltering heat, throwing the ball around at all times creating 12 tries between them, with Cents scoring 8 to 4.
The game was split into four 20 min halves with a mix of variations of players.
Moseley Oak had the better of the first half with a quick try in the first minute when their centre ran a good line and cut straight through the Cents back line.
At this point it looked as though Cents were in for a tough trail game.
When we did get possession we struggled to get through a stern Moseley defence.
The first quarter ended 1 try to 0.
The second quarter was an improvement for Cents when they managed to keep hold of possession and had good territory and came away with their first try when prop Sam Preece crashed over.
As Cents were pressing the Moseley try line with good crashing runs from new inside centre Peru the ball spilled out straight into a Moseley wingers hands who then went on to sprint the length of the field to touch down, 2 try's to 1.
More changes made for the 3rd quarter and Moseley scored a quick try with some good driving play, then with some good running breaks from centres Rob Jones and Sam Smith, no 8 Rich Pinkney put a delightful chip through for winger Ben Turk to gather and score.
3 try's to 2 for the hosts.
Another breakaway try for Moseley after a spilled pass by Cents going into the last quarter 4 , but Rob Jones grabs a try to close the gap right at the end, game on!! 4 try's to 3 with 20 minutes to play.
The last quarter was cents best display of the day, the ball was ran at great pace and a good run of play going through many phases left fly half Harry Preece to walk over in the corner.
Centre Sam Smith scored a good solo try running through a number of tackles and Cents fitness was beginning to show now as fullback Lewis May scored from his own chip through and the got his second with a delightful move from the training ground.
Cents 8th try came from winger Matt Humphreys who gave a great hand off and sprinted in to seal an win.

This was a good test for Cents and their hard work in pre season showed that fitness proved vital in the end scoring 5 try's in the last quarter, with 7 of the 8 through the back line.
There were some great performances all round especially from the new boys of centre Peru, flankers Craig Ballinger and Niall Gibbons, and returning to the club Rob Jones and Lewis May made good impacts.

Coach Jack Preece was delighted how the game went and said for the first runout it went well and we have some really good strength in depth. Still plenty more to work on and we will get better and better.
The lads have worked hard so far and it showed in the last quarter when we blew them away!!