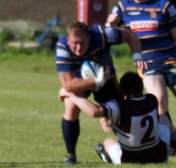 Cents travelled away to Bletchley this weekend with a strong squad and returned home with 5 points to keep the pressure on Bracknell who are sitting in top spot 4 points ahead, although Cents have a game in hand.

With no games in the last two weeks and no real proper training facillities, apart from the Tredworth session, Cents had to keep their faith in their high fitness and strong defence.
They did just that by not conceding any points in this match and even when they went down to 12 men for the last 7 minutes of the game, although they were all flat on their backs when the final whistle went.
With Rob Tucker,Dan Knapman & Capt Pete Willetts all sent to the bin one minute after another with numerous penalties, Coach Jack Preece said "I thought the players really showed alot of guts and spirit when we were down to 12 men and although it was disapointing to give so many penalty's away the boys worked hard to keep a clean sheet when we had a 39-0 lead."

With Blecthley's pitch totally under water wednesday it was surpisingly in good condition.
For the first 20 minutes of this game both sides were evenly matched and the referee was struggling to control the game.
Cents managed to holt any Bletchley attacks but managed to score 2 try's through fullback Lewis May from a Liam Hemming break and Prop Sam Preece from a driving maul. both conversions missed.
Half time score 10-0 to Old Cents.

The third quarter was all Cents when they scored a further 4 try's inside 20 Minutes, with breaks from Liam Hemming and Joe Preece the try's were scored by Flanker John Huxtable, Lewis May got his second and Liam Hemming scored two, Hemming kicked two conversions.
The final try came from Winger Rob Jones to make it 39-0 with 10 minutes to go.
Bletchely never gave up and had a last flury of plays and Cents were over eager in defence and lost 3 men to the bin but they held firm and the scored stayed the same.