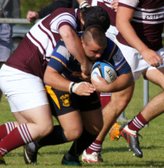 Cents travelled to Salisbury this weekend and got their 12th consecutive win and what a battle it was.
Salisbury play a similar game to Cents by trying to play expansive rugby and had a big crowd to watch this second battle between the two sides.
Salisbury are playing in their 100th year of rugby and were having a Vice Presidents Luncheon before the game.
It was earlier in the season when these two sides met and Cents came out on top 28-20, and this weeks game was the start of the leagues
re-matches.
From the first whistle the heavens opened up with some heavy rain pouring down in the first 10 minuets, but both sides were determind to try and play open rugby. Cents were the first to get points on the board after a couple of lovely runs through the backline but were holted by some good defence from Salisbury.
They managed to get a penalty which Liam Hemming converted.
Score 3-0
Cents then got their first try from a driving maul from a lineout which Captain Pete Willetts touched down but the conversion was missed.
Five minuetes later Alex Mathers touched down with an indentical try from another driving maul from a lineout and this time Hemmings converted .
Score 15-0
AT this stage Cents looked in control and the Cents scrum was well on top and with 25 mins gone a five pointer looked on the cards.
Disaster struck on the 25 minute mark when no8 Big Ben "Gravey Train" Slatter recieved a red card for punching which got the Salisbury team fired up and they came back into the game threatning the Cents line, but could only get a penalty in front of the posts.
Score 15-3
At this point Cents lost their talisman tight head prop Scott Fritchley who was replaced by young 18yr old Mike Mathers and with these two big lads missing, the scrums became more even.
A few minutes later with Cents under pressure on their line Fullback Lewis May was sin binned for killing the ball which put Cents down to 13. Salisbury went for a quick tap but was holted by some aggressive defence.
Salisbury then missed their chance when they made an overlap but didn't use it. Cents were glad to hear the whistle for the first half to come to an end.
At half time Captain Pete Willetts had some stern words with his troops and they re- grouped for the second half.
Both teams were defending well and stopping any momentum but with Ryan Garrot and Liam Hemming controlling the game well by keeping the ball tight with the forwards and kicking some high balls for the speedy backs to chase they managed to get another penalty. Cents choose to ignore the ref's advantage and went for the posts and it was clear they wanted to win the game rather than looking for the four try bonus point.
Final Score 18-3
Coach Jack Preece was delighted with the win saying "This was a fantastic performance from the boys today under the circumstances. Going down to 14 men with nearly an hour to go and then losing Sotty and Lewis May which mades us down to 13 and then we lost our flanker Alex who was replaced by Rich Preece who is normally a scrum half. Even our Centre Ryan Townsend had to step in at second row on our scrum. The boys were brilliant and for a young team they showed alot of maturity and composure to win this game, this was our hardest game so far this season.
My man of the match went to young Mike Mathers who came on at prop and we still maneged to hold the sscrums with 7 men."