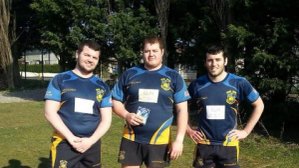 Cents made to work hard for latest victory

Brothers Sam, Joe & Ben Preece together for the 1st XV

Cents were made to work hard for their latest victory to secure home field advantage in the playoff's.
Cents today secured home field advantage for the playoff's after Newbury fought to the end and made Cents work hard for their latest victory.
Newbury put in a far better performance than the score line suggests and if they had taken some chances the match might have been a bit closer,although the home side were never in any danger of losing this match.
In ideal conditions for Cents,the home side were able to move the ball from all over the park and their free running backs enjoyed a steady stream of ball which was used effectively.Although their first two tries came about from old fashioned catch and drives from lineouts near the visitors try line.
Capt Pete Willetts opened the scoring followed by Sam Preece,who must be the leagues top scorong prop with 11 to his name and both tries were well converted by Connor Gwilliam from difficult positions wide out.After this intial burst of scoring Newbury responded with a penalty although they had come close on a couple of occasions to scoring a try.Score 14-3 to the home side and Cents completed their first half scoring when centre Ryan Townsend completed a sweeping attack from the home side. This try was also converted by Connor Gwilliam to give Cents a 21-3 half time lead.
Cents were well their lead at half time they had complete control of the match although Newbury had had their chances to put further scores on the board.Newbury had also defended well and caused the home side to make numerous handling errors which if the ball had gone to hand might have given the home side an enormous lead at half time.
Cents started the second half on the attack and were rewarded with three quick tries from Ben Slatter,Sam Preece(his second) and Lewis May.Connor Gwiliiam converted one of the tries and by the start of the final quarter Cents led 38-3.
Newbury to their credit kept fighting all the way through the match and their young side gave the club some pride in the way they played and they are the future for them whatever happens in the league.
Cents finished their scoring with a second try from Capt Pete Willets and this was also converted by Connor Gwilliam for a final score line of 45-3 to Cents,despite the referee saying the score line was 41-3(we have video evidence).
With home field advantage secured for the playoffs,Cents can now relax a little bit with a heavy fixture programme for the final few weeks of the season.
Old Cents man of the match was flanker Dan Knapman in a workman like performance from the home side
Bracknell losing at home to Windsor has made for an interesting end to the season,if we win our appeal against the five point deduction and we get our points back we will be level on points but they still would be top because of their superior point difference.They must complete the season with maximum points from their last two games to win the league,any slips and we might be able to take advantage if we get maximum points from our last two matches.
Share via
FacebookTwitter
https://www.pitchero.com/clubs
Recent news