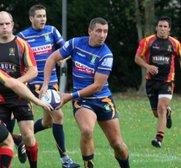 FLOWING RUGBY TO MUCH FOR NEWBURY

Cents played this rearranged home game at Newbury this week due to the Centralian pitch still in a boggy condition.
At first the game was going to be played on their No4 pitch but on the day the game was played on the main pitch which suited Cents flowing rugby.
On a bitterly cold day Cents kicked to Newbury and immediately won the ball back and feed the ball out wide to Liam Hemming who sliced through the backs defence to score within 20 secs and before the announcer could read out the team sheet.
Hemming converted his own try from out wide.7-0
Newbury had their own game plan, which was to keep the ball tight and after several pick and go's they won a penalty and the ref sent Cents captain Pete Willetts to bin for 10 mins.
Nothing came from it and Cents managed to get themselves back into Newbury's half.
Cents then extended their lead when they won a scrum against the head and after several phases Mike Mathers crashed over to leave Hemming an easy conversion. 14-0.
The first half continued with Cents throwing the ball around trying to stretch the Newbury forwards and this lead to a try by Fullback Lewis May to score in the corner. 19-0 at Half time.
The second half started and Cents spotted Newbury's weakness and started moving the ball wide at every opportunity.
Newbury continued to defend well with some last ditch tackles, and when in possession they kept the ball tight and continued to pick and go for the remainder of the match.
However Cents wanted to keep the ball alive and the next try came through Lewis May's 2nd of the day with some nice interplay to get their bonus point which was converted by Hemming. Score 26-0
Cents then brought on new signing Conner Gwilliam into fly half who had an immediate impact and made a couple of darting breaks and scored under the posts converted by Hemming.Score 33-0
With the game now in the bag Cents players started being a little greedy and several try scoring opportunity's were missed but they did manage to score two more through Prop Sam Preece and a second from Conner Gwilliam. final score 43-0.

This was a good blow out for Cents as Newbury made them work hard for the win and our defence was very good keeping another clean sheet making it 5 games in a row without conceding a try, but they know the opposition next week will be considerably harder and they will have to cut out their little mistakes.
Man of the match went to No 8 Rich Pinkney and winger Rob Jones who both looked very strong with the ball in hand.