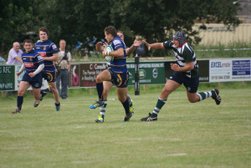 First half performance, too much for Witney

This week, Cents played their last League game away at Witney and it became a game of two halves which included the weather!
It also provided us with two debuts for this season with George Preece and Josh Phillipps who both played very well and said the pace of the game between the 1sts and 2nds is miles apart, also it was the 50th 1st team game for winger Rob Jones and Jack Preece's 100th league game as coach.

Witney's excellent hospitality to our supporters and players were not enough to make the Cents side relax for this fixture.
The match started at a rapid pace and Cents came out of the blocks quickly and scored 2 tries in the first 10 minutes through Center Liam Hemming, Conner Gwilliam Kicked one conversion to take an early lead.
Cents other Center Ryan Townsend sold a dummy and crossed for a try and before the end of the first half Hemming using his pace scored a further 2 tries to give him 4 try's in the first half.score 27-0

The heavens opened for the second half and Witney stepped their game up and replied with two tries of their own but Witney's kicker had an off day missing a few kicks in front of the posts.
Cents came back with another two tries from prop Scott Fritchley and a second from Ryan Townsend, Conner Gwilliam kicked one conversion and the final score ended 39-10.
Captain Pete Willetts was named man of the match for his hard work round the feild closely followed by Hemming who went off after scoring his 4 tries due to being to cold!!