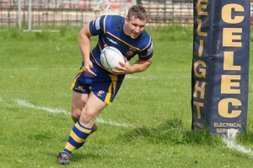 Cents power and pace to much for Marlow

On a dry, sunny but cold day in front of a good crowd this was perfect conditions for the Cents style of rugby.
From the first whistle Marlow had the possession but could not break through Cents defence and then when Cents managed to get hold of the ball they scored a good try from inside their own half when the ball went through several pairs of hands for Rich Pinkney to cross under the posts which Connor Gwilliam converted.
This opened the flood gates as Cents managed to score five more try's before the end of the first half.
The Cents forwards dominated in the set peice and the backs ran riot outside.
Liam Hemming scored a good try from a move off the training park and then winger Rob Jones scored out wide in the corner. Connor Gwilliam converted to give Cents an early lead of 19-0
Marlow hit back with a single penalty to get them on the scoreboard and then straight from the kickoff Lewis May chased up the field and out jumped the opposition to juggle the ball into his hands and dodge his way through a couple of tackles and dived over the try line to score a magnificent solo try.
The Cents forwards started to dominate the scrums and from a 5m scrum the ball went blind and through some slick handling May crossed for his second try. Dave Knight, who stepped in at fullback at the last minute for the poorly Joe Preece scored the last try and Fly half Gwilliam kicked his 4th conversion to give Cents an half time score of 38-3.
Marlow had their work cut out to catch Cents at this point and they started the second half the stronger of the two sides and really took the game to Cents. A lot of teams may have caved in at this ponit but this Marlow team never gave up and continued to attack the Cents line for 20 mins.
Cents held firm and are a very difficult side to score against, they have the best defence in the league and have conceded the least amount of try's.
After the storm Cents then got into top gear and ran in 5 more try's, the first from Connor Gwilliam, two more from the superb Rob Jones who scored an excellent try beating at least 4 defenders getting his hat trick for the day.
Rich pinkney got his second and Ryan Townsend got the 11th and last try on the 80th minute.
Gwilliam kicked 3 cons to give Cents a winning score of 69-3.
Coach Jack Preece said, "We had a strong squad of players today and at times looked really sharpe and scored some excellent try's. There was some great preformences out there today with Prop Scott Fritchley and Openside Flanker Dan Knapman standing out and both our wingers Rob Jones and Lewis May were first class.
We can now take a bit of pressure of us in the next 3 league games and look forward to the cup rounds."