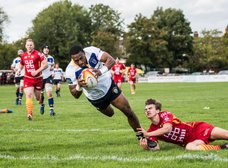 'I had a great time at Cov'

Dom Lespierre is excited at the prospect of facing his former club for the first time when the league leaders arrive at College Meadow on Saturday.

The flying wing spent two seasons at the Butts Park Arena after arriving at Coventry from Australia in the summer of 2014, scoring 25 tries in 45 appearances before joining OEs last year.

“I’m really looking forward to the game,” Lespierre said. “I had a great time at Cov especially my first year up until Christmas when I unfortunately broke my jaw and missed the rest of the season.

“We had a great group of boys who were really talented. We went on a 17-game unbeaten stretch which was - and maybe still is - a club record and were unfortunate not to finish the season at the top.

“Beating Ealing Trailfinders who were the powerhouse club at the time under lights in front of a near sell-out crowd at BPA definitely stands out as one of my fondest memories. Cake Club Thursdays with the Changing Room One boys, and the final game of the 2016 season away at Wharfedale will be something talked about by all those involved when we are old and grey!”

Lespierre is one of two members of OEs’ starting line-up to have played in the navy and white hoops of Coventry. Fly-half Joe Carlisle made seven appearances for Cov while on loan from Premiership side Worcester during the 2009/10 campaign.

After leading the National Leagues in tries last season with 36 - an OEs club record - Lespierre has continued in much the same vein this season, currently topping the National One try-scoring charts with 11 to his name so far, one ahead of Coventry’s own prolific try-scorer, full-back James Stokes.

Lespierre admits Elthamians face a massive challenge on Saturday against a Coventry side who have recorded a perfect 10 wins so far and are already 10 points clear at the top of the table. “Coventry are bit like rugby’s equivalent of Manchester City, the way they are tearing up National One at the moment,” Lespierre said. “With the investment, resources and quality of players they have available and a brilliant ground, it would be more of a shock if they weren’t in the position they are currently.

“It will be a battle for 80 minutes that’s for sure and we know any lapses in concentration will be punished, so as a side we have to be on the money from the first whistle.”

Regardless of the result, Lespierre is looking forward to renewing old acquaintances come 4pm on Saturday afternoon. “Funnily enough there won't be that much catching up to do, as most of the people who were there when I was, have left,” he said. “But I will definitely catch up with a few of the boys that I know are coming down, along with Eric the groundsman and Brian who's on the backroom staff and Jo who works in the office. It will be really nice to see them all.

“I'd say I had a good relationship with the Coventry fans - they certainly get behind you especially when things are going well. Many of them congratulated me when OEs got promoted and have reached out again prior to this week’s game, which is great, so I will definitely be having a few drinks with them afterwards!”