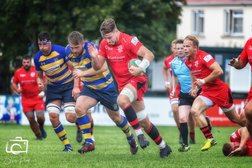 'Jersey fixture shows how far we've come as a club'

Elthamians face the toughest possible test of their National One credentials this weekend when they take on Championship club Jersey Reds.

Director of Rugby Gavin Lach is flying out a 45-man squad, which includes 10 of the club’s 12 summer signings, to the Channel Island on Thursday morning for the double header against Jersey Reds on Saturday. The Extra 1sts take on the Islanders’s second string at midday, followed by the main event at 3pm when OEs 1st XV play a strong Jersey side who finished fifth in the Championship last season.

It will be the highest ranked opposition Elthamians have faced in the club’s 107-year history, and Lach admits he is excited at the prospect.

“I can't speak highly enough about Jersey, who have welcomed us with open arms and are putting on two games for us this weekend which is fantastic,” Lach said. “When you consider they played Harlequins last Saturday, had a contested training session with Gloucester on Tuesday and now this Saturday they are playing Old Elthamians! It’s a real privilege and shows how far we have come as a club.

“Of course we know how tough it’s going to be - there is no doubt about that. But it’s exactly the sort of game we need to assess where we are as a squad and highlight areas we need to improve upon ahead of the National One opener against Rotherham.

“Last year, we had a very easy pre-season and it cost us dearly going into the first games of the league campaign because we simply weren't ready for the physical intensity of National One rugby. I got it wrong and I hold my hands up to that. But Jersey will be a very different proposition to anything we have faced before and I’m intrigued to see how our players react to that.

“The result is irrelevant to me, it’s all about performance and seeing how we perform under pressure against top quality opposition.”

While Lach was pleased with the run-out against Bury St Edmunds last Saturday - Elthamians emerging comfortable 62-19 winners on aggregate in 4 x 30 minute games against the National Two South club - with 50 players used in four different starting line-ups, the matches raised as many questions as answers regarding selection. “We left eight players out of the Bury gig for one reason or another, so we could have a decent look at other players,” he said. And the Elthamians boss insists places are up for grabs in the starting line-up to play against Rotherham on September 1st.

“We’ve said all along, as we said last year, that players would be selected on form not reputation,” Lach said. “Last term there were several players that started out in the Extras, showed excellent form and ended up playing most of the season in the first team. And I expect the same thing to happen again this time round. We have a big squad and the two Jersey games are a tremendous opportunity for players to show what they can do and stake a claim for that first team shirt.”

Elthamians are no strangers to Jersey Head Coach Harvey Biljon. The former Wasps scrum-half coached the 1st team at Foxbury for OEs’ previous Head Coach Alex Natera in 2007 while he was at the helm of Blackheath.

He is expecting a hard fought encounter on Saturday. “Elthamians are a club who’ve made massive strides in the last few years and they are clearly ambitious to play at a higher level than National One,” he said. “You can see that in the way they’ve recruited, with a lot of quality players.

“I anticipate they’ll be well-organised, well-prepared and well-drilled and expect them to provide a real test for our squad, who’ll be at the end of a week which has featured two encounters with Premiership opponents. It will be a real test of our players’ mental and physical toughness, and they’ll be up against a side who I’m sure will want to show they can compete with a Championship side.”

Biljon added: “I’m really pleased that Elthamians will be travelling in numbers and playing against our Athletic XV prior to the 1st team game. It should be a terrific opportunity for supporters to see rugby from both the pro and amateur teams on the same day and a great club day.”