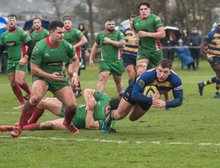 'Let's fasten our seatbelts and enjoy the ride!'

Gavin Lach makes two changes to the starting line-up ahead of what he describes as the most important seven days in Elthamians' history.

After a rare weekend off, the Old Boys return to National One action at College Meadow tomorrow when they host Plymouth Albion (kick-off 2pm).

Then the following week, OEs face the eagerly anticipated top of the table showdown at Ampthill - a titanic clash that OEs DoR insists will decide the destination of the title.

“The next seven days will define our season,” Lach admitted. “You could even say it’s the biggest seven days OEs have faced in their history. There’s no point down-playing it because that is a fact. We just have to make sure we are switched on.

“The league is so tight, as it has been all season, none of the teams at the top can afford to drop points. It’s huge pressure because a defeat now would make it very hard to stay in touch at the top with only six games remaining after tomorrow.

“Our only focus is on Plymouth. We know what a good side they are, and on current form they are arguably one of the top two or three teams in the league. When we played them at their place, we were hanging on like grim death at the end. So if we start looking any further ahead than tomorrow, we will get beaten it’s as simple as that.”

Lach added: “But it’s important that everyone at OEs enjoys moments like these. Nobody would have thought we would be where we are all those years ago so let’s enjoy it now.

“The whole squad - and we’ve used 44 players so far - and the back room team around them have been outstanding and bought into where we want to get to. So let’s fasten our seat belts and enjoy the ride!”

Lach has made two changes to the side that beat Esher in their last outing a fortnight ago. Lewis Brown starts in the front row in place of Alex Rogers, while there’s a long awaited return for Max Wilkins, scorer of Elthamians’ only try in the corresponding fixture last season (pictured), who replaces the honeymooning Kieran Moffat in the centres.