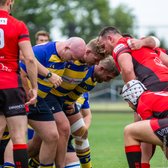 Seven players will make their competitive debuts for Elthamians tomorrow in the opening match of the 2019/20 National One season at Canterbury.

It’s the most debutants the club have fielded in one match since the first outing of the 2015/16 National Two South season when nine players wore the blue and gold for the first time away at Taunton.

In the forwards, Tom Concu, Jared Saunders and Austin Hay (all pictured), who all impressed in the pre-season fixture at Championship side Jersey, make up a new-look front row with former Ospreys and Edinburgh lock Perry Parker packing down behind them in the second row.

Out wide former Exeter Academy fly-half Ted Landray gets the nod at No.10 with ex-Jersey centre George Eastwell outside him and Sal M’Boge starting at full-back.

Fly-half Ollie Bryant and flanker Harry Elbrow, who joined the club at the beginning of last season but missed most of the campaign through injury, are also set to make their first league appearances for the club coming off the bench.

“Selection was so tough for the first game of the season, but it always is,” said OEs DoR Gavin Lach. “But these guys have all impressed in pre-season and we feel this is the best side we can put out to get a result in what will be a very tough game at Canterbury.”

Canterbury v Old Elthamians kicks off at 3pm at the Marine Travel Ground.