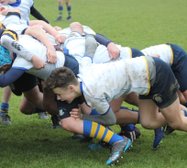 Old Elthamians U14's entertained Sevenoaks on Sunday 6th March 2017 eleven months on from their last meeting when today's hosts where comfortably outmuscled and unceremoniously exited out of the Kent Cup, a defeat which rounded off a challenging first season of junior rugby for OE's.

A damp, cold, windless morning welcomed all to Fairy Hall, home to Eltham College for over one hundred years, an ill named but suitably grand backdrop for OE's fixtures over the last few seasons.

Despite the conditions and early KO OE's started brightly seemingly determined not to repeat the error strewn opening period of the not too recent Met Cup final. After some evenly contested initial exchanges Outside Centre Tilley tackled his opposing number and stole possession just inside his own half releasing Open-side Sebastos into space, quick recycling followed, eventually launching Wing Chanthram to score. Conversion kicked 7-0, 5 mins.

Pressure straight from the restart saw OE's breaking into Sevenoaks' twenty-two and winning a scrum for a knock on. From the resulting set piece Jones at Scrum Half popped a lovely ball to Inside Centre O'Nestor-Bryne at full speed running an intelligent line from behind the scrum straight through the Sevenoaks defensive line leaving flailing arms and bodies in his wake as he touched down under the posts, a perfectly executed set play. Conversion kicked 14-0, 10 mins.

This second score spurred Sevenoaks into life and for the next 10 minutes they dominated possession and worked phases close to the breakdown efficiently marshalled by their Scrum half. However OE's defensive line never wavered, not a tackle missed. Harvey-Grey at Lock floored the visitors powerful Number Eight setting the tone, Wilding at Tight Head made three enormous tackles in succession, on each occasion repelling the attacking line backwards until eventually the pressure forced the error and Sebastos conjured up the ball from a ruck just outside the twenty two, passing to Blindside Flanker Moyse on another bullish run offloading to Captain and tireless Number Eight Norman who made further ground, eventually deciding to let the backs take the glory again by subtly releasing Wing Baker to score in the left corner. Make no mistake though, that was a Forward's Try. 19-0, 25mins.

A quiet period followed to half time although OE's came close to scoring just prior to the whistle. 19-0 Half Time.

A couple of changes at half time, Haytham for Harvey-Grey who had a good half at Lock constantly making a nuisance of himself, fully deserving his selection. Watkins at Fullback off for a well earned rest after adding yet another string to his versatility bow, is there any position on the pitch where he'd look out of place? Another strong performance by Jones, tenacious at Scrum Half shifting to Full Back for the second half and replaced by the effervescent Davies, what Coach wouldn't want one of these Academy 9's in their squad, let alone both. One of the Sevenoaks' coaches was heard muttering that he thought his boys appeared "shellshocked" during the half time team talk.

There was no let up for the visitors in the 2nd half, Moyse broke early, first left then right cleverly seeking out support runners, Tilley to Jones joining the line from fullback and onto Chanthram to speed home and score in the right corner. 24-0, 34 mins.

Sevenoaks are now desperately fighting to get into the game, a charging run by their solid and pacy replacement Centre was halted in its tracks by wonderful first up tackle by Haytham the replacement Lock 5 metres out from the visitors twenty two, the ball was snaffled away by Davies who broke to right offloading to the ever calm and measured Jagger excellent at Flyhalf all game who merely caressed the ball onto Jones and on out to Baker who was bundled into touch just short of the try line.

Sevenoaks win a scrum on their five metre line from the line-out but found themselves going backwards without the ball after a dominant drive from OE's pack, over the try-line for Jeras to score, well deserved for his tenacious work particularly in the breakdown. 29-0, 40 mins.

Straight from the restart OE's again build pressure, Davies catches and delivers a pinpoint pass to Jagger quickly onto O'Nester-Byrne then Norman again joining the attacking line, the play breaks down near the left hand touch line and Sevenoaks win some much needed ball, short lived though as a big tackle and turnover by O'Nestor-Byrne is offloaded to Baker who is halted just short of the try line where Moyse gathers and drives powerfully over to score in the left corner, great attacking Rugby and support play. 34-0, 44 mins.

OE's continue to dominate possession and territory for the next 5 mins, eventually Captain Norman again makes another break putting Baker in to score his second, in the right corner. 39-0, 51 mins.

OE's maintained their dominance straight from the restart, Jones gathers and kicks into space near the oppositions twenty-two, Moyse wins possession at the resulting breakdown and the ball again finds it's way swiftly to Baker on the right who cuts back inside searching out support from Tilley and again onto Moyse then to O'Nester-Byrne who cleverly dummies an overworked looking Sevenoaks defensive line to scores under the posts. Conversion kicked 46-0, 55 mins.

OE's doggedly absorbed some late pressure after clever refereeing kept them pegged back in their own twenty-two for most of the last five minutes, defensively solid OE's win line-out ball and Davis kicked casually into touch to end the game with OE's winning 46-0.

From my side of the touchline that was a really good performance, arguably our best as Juniors. We really benefited from a mobile set of forwards, the back row of Norman, Sebastos and Moyse were all over the field. Fisher looked at his most mobile in the 2nd row. Kemp as usual took on a lot of the unglamorous breakdown and defensive duties and Harvey-Grey looked comfortable at this level. Jeras is growing in stature with each passing game and Haytham showed exactly what he can do in both attack and defence during the second half. Wilding at Tighthead had a massive game today, superb in defence and assured and destructive with ball in hand, I don't recall ever seeing a player make three tackles in row whilst gaining 10-15 metres of territory, I hope he got a special roast dinner when he got home because he deserved it. The Backs where all great today but the forwards dominated, I doubt that Sevenoaks team have ever lost by that margin.

by Steve Tilley, A Dad still struggling to come to terms with a Dictaphone