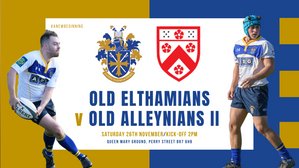 By Jon Edwards
2 days ago
Share via
FacebookTwitter
https://www.pitchero.com/clubs

Elthamians return to league action at the Queen Mary ground this Saturday (November 26).

OEs will be looking to get their Counties Three Kent League campaign back on track this Saturday when they entertain Old Alleynians 2nds.

The Blue & Gold go into the game on the back of three successive defeats after a horrendous injury list threatened to derail their promising start to the season.

However, the last two weeks of league inactivity has proved to be a blessing in disguise for the club allowing extra recovery time for several long term injury absentees.

They face an Alleynians side currently lying fourth in the table with six wins from their nine games. In their last outing two weeks ago, they went down 42-10 at home to Medway 2nds.

For those intending to travel by car to the game, there is limited parking space at the ground and supporters are advised to park in the surrounding roads.