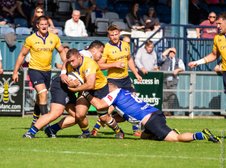 Sam Howard insists there is no cause for concern despite Elthamians’ indifferent start to the new campaign.

The 26-15 defeat at Sale on Saturday following on from the home loss to Rosslyn Park was the first time OEs have lost back to back league games since the beginning of January when they suffered defeats to Blackheath and Darlington Mowden Park either side of Christmas.

“But Ampthill lost two of their first three games last season and went on to win the league, so there is certainly no need to panic. If we weren't creating chances or we were leaking points then I’d be concerned. But we are creating chances and I thought our defence was excellent at Sale.

“Obviously it was disappointing to lose that game, but I think you have to give huge credit to Sale. We caught them on a really good day and I thought defensively they were excellent.”

He continued: “It was a much improved performance on the Rosslyn Park game and actually I thought we started very well in the opening 10 minutes. If we’d scored early on, I think the whole complexion of the game would have changed. But we didn’t and instead of sticking to the game plan, we lost patience and tried too hard to force an opening. And that’s when we made mistakes.

“I think perhaps we are feeling the pressure a bit and the weight of expectation on us since last season. There is no doubting the quality and potential in this side, we just need to relax and stick to the processes that served us so well last season.”

Saturday’s opponents Plymouth have also made a mixed start to the National One campaign. They opened with two defeats to Bishop’s Stortford (42-40) and Cinderford (36-29) but opened their account for the season last Saturday with a 33-27 win over Rotherham Titans.

Elthamians have never lost to the South Coast side in four meetings, but games between the pair are always close, incident-packed affairs. In the corresponding fixture last season, OEs won an eight-try thriller 40-29 at College Meadow. And Howard is expecting a similarly hard fought encounter on Saturday.

“Plymouth have a big set of forwards with powerful ball carriers, and they also have real pace out wide so they are a dangerous side, no doubt about it, “ Howard said. “I know it’s a cliche but we have to win the gain-line battle and the collisions. That will be where the game is won or lost. They also like to move the ball wide as well so our defence is going to have be on the mark again.”

Elthamians have made several changes to the starting line-up, most notably with Dylan Flashman making his long awaited first league start in the second row after a string of outstanding performances in the Extra 1st XV, while OEs hand a first team debut to centre Marc Koteczky, who signed for the club last month.

The Australian-born utility back, a former member of the Australian Sevens training squad in 2013, lines up against his former club on Saturday. Koteczky spent two seasons at Plymouth and made 16 appearances for them in the Championship in the 2014/15 season.

“Dylan has been outstanding for the Extras so far this season and thoroughly deserves his call-up,” Howard said. “And Marc has really impressed in training, and deserves his chance to show what he can do.“