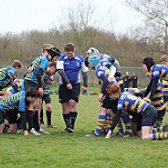 It's a mark of how much this team has progressed over the last year that OE's U14's progressed to this seasons Kent Cup final comprehensively defeating last years two finalists and only conceding one try in six qualifying matches whilst scoring over forty.

Two consecutive passages of play typified most of what was good and all that was bad in OE's performance today.

During game two and cruising at 19-0 against a clearly reeling Tunbridge Wells our back line strayed offside for the umpteenth time and then were penalised twice for not retreating which allowed last years champions an easy run in to score, gaining an unlikely foothold in the game.
However, the status quo was quickly restored from the restart as Burfoot gathered and broke from OE's ten metre line on the right making 25 metres drawing in the opposition like bees to a honey drunk grizzly before one poor soul got trampled underfoot toppling the champion shot putter indignantly to the turf, quick accurate recycling followed from Davies to Jagger who flighted a superb pass to O'Byrne-Nestor, then swiftly onto Tilley who cut inside passing back to the belligerent Inside Centre and then to Kahlil joining the attacking line once again, onto the tireless Moyse and finally out to Wing Baker who's clever footwork took him through three defenders to score. Forwards and Backs linking with strength, skill, speed and intelligence, try of the day.

Overall OE's defence was rock solid today especially when you consider we cheaply gifted ball to decent opposition on far too many occasions, nearly all from offsides in the back line which could cost us dearly in tougher games. One try conceded in six games, one too many. This should however be an easy fix, occasionally it's a good idea for Centres to listen to coaches, refs, linesmen, parents and teammates!

The Forwards were rock solid today, dominating the set plays and hardly taking a backward step. Fisher, Burfoot and Pearce all made positive contributions and will have even more impact as their fitness continues to improve. Eras tenacious again especially at the breakdown ably supported by the ever present Kemp. Another typically strong performance from Fitch particularly in defence. Moyse,Watkins and Kahlil where exceptional all afternoon, linking between backs and forwards seamlessly, a masterclass. Deserved cameos by Harvey-Grey, Petite and Karatay rounded off a superb afternoon for the big men.

Some of the passing through the backs today was outstanding, when last years cup winning coach takes the time to email praise on your performance you know you're doing something right. Delivery and interplay between Davies, Jagger, O'Byrne-Nestor, and Jones was at times sublime, more fitting of a top U16 side than this age group and the finishing by Chanthrakumarun, Baker and Tilley was devastating, Baker was particularly dazzling in attack, intercepting and jinking his way to well deserved tries. Farage, Beatie, and a returning from injury Toothill all looked at home when their opportunities came, with Farage particularly impressing with some neat passing during the latter stages against Sevenoaks.

With better discipline this team can go all the way.