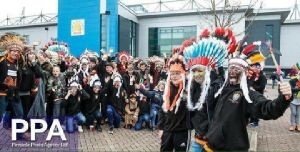 U13 tourists in the wild, wild west

The U13 tourists headed to the wild west for their 2016 tour. They travelled by planes, trains and automobiles to set up camp in a cosy hotel in Exeter – what luxury after the last 4 years of caravans and crumbling chalets.

In a change from tradition, the long days of mini rugby tournaments gave way to a programme of competitive action. Day one started with a match against Ivybridge RFC, champions of Devon for the last 3 years. We played a good match, which OEs won comfortably, rotating all 25 of the touring players. For good measure OEs were also comfortable winners of the following rounders match. We were treated royally by our hosts, and it was fantastic to see all the boys mixing enthusiastically after the game, while the parents showed their best manners by drinking the local cider and scoffing down pasties and treacle pudding.

This was a good foundation for a relaxing afternoon of paintballing. While the boys and some of the more foolish parents shot each other from close range – opposition or team mates seemed to get the same treatment – the smarter parents set off to explore the waterfront sights and more sampling of local produce. We all got together again in the evening to reload on pizza at the only restaurant in town crazy enough to entertain our whole party.

Day two started with more rounders and a quick game of touch rugby in the park before heading off to Sandy Park to watch the big game between the Exeter Chiefs and Wasps – competing for home advantage to play each other again in the premiership semi-final. In front of a packed house and spurred on by OEs wholehearted support, the Chiefs won a great game and sent us on our way home with no voices left.

The tour in numbers:
• 15,000 paintballs fired in anger
• 199 miles door to door
• 53 tourists, like herding cats
• 25 teenage boys, penned in a hotel
• 9 tries scored by OEs against the champions of Devon
• 1, there’s only 1, Tanya Moyse, who organised the tour and kept us in order (just)
• 0 injuries, damages or missing persons (despite the boys’ best efforts)