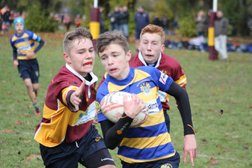 A fresh, crisp, late autumnal morning greeted OEs U14 A's to Dartfordians on Sunday. Nestled between the picturesque Village of Bexley with its gently meandering River Cray and the ever audible A2 dual carriageway with it's toxically meandering traffic. The pitch was wet but holding up well after the recent bonfire night downpours.

After a thorough warm up session the coaches' emphasis on a good start soon became apparent. OEs dominated early possession with Winchello unlucky not to capitalise during the first attack. Reward soon came though with two quick breakaway tries for Moyse, a revelation this season in the impressive back row. After a short period of defensive work, turnover ball quickly turned again to attack with Toothill exploiting the open spaces with a well executed kick chased down and finished by Tilley.

Try of the day followed. A barracking run from inside his own half by front rower Wilding, drawing in and swatting away defenders, going to ground just beyond the opposition 10mt line, superb clear out work by the forwards led by the tireless Skipper Norman, quick ball between Halfbacks and another clever kick for the Outside Centre to chase, gather and score. Good Rugby.

Two further tries closed the half. The first after a period of forward domination O'Byrne-Nestor broke determinedly down the right beating his defender and cleverly drawing in the full back before sympathetically off loading to the Outside Centre for an easy run in. The second, scored by Sebastos the tenacious "Pocket Rocket" Open Side, he'd been flirting with the Referee's whistle on more than one occasion during the half and it was as if by magic that he popped up from nowhere to intercept inside the opposition's twenty-two to score under the posts, leaving Darts scratching their collective scrum caps. A great defensive cover tackle by Moyse kept the score at 34-0 into the break.

Half time saw the whole bench come on providing a well earned rest for Burfoot & Wilding both strong in the set piece and brutal but deceptively skilful with ball in hand, Kemp who punched well above his weight in the front row, and was ever present at the breakdown where only a forward coach can fully appreciate his contributions and Baker who again showed his versatility on the wing today after impressing at fullback earlier in the season.

Despite the reshuffle the second half continued in similar vein as replacements Jones (initial at full back, then scrum half), Pearce, Atalla, and Fisher (pack) joined seamlessly into the action. Three further tries came in quick succession with Jones on a good supporting line finishing off a break in right hand corner. The second after Hooker Jeras broke strongly through the centre the ball secured efficiently by Fitch eventually launching O'Byrne-Nestor off on a tenacious try scoring run. The third followed a line break and determined run in by the Outside Centre, 51-0.

Apparently disappointed with his try count, enter Winchello stage left, up to full speed in five strides, arcing right while outpacing the entire opposition defensive line before touching down unchallenged. Encouraged by this effort and for those who may have missed it, the turbo charged Winger instantly produced a repeat performance, 63-0.

OE's final try came from an optimistic kick and chase from Jones, as the ball looped harmlessly towards the opposition Wing an unimpressed relative could be heard muttering "That's s..t!" just as the replacement Scrum Half gathered the awkwardly bouncing ball and touched down for his second.