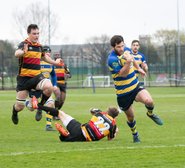 A late try from Kieran Moffat was enough to give OEs a third successive victory and keep their title hopes alive at College Meadow on Saturday.

Old Elthamians 22 Cinderford 17
It was far from convincing, but Elthamians showed once again the stamina and determination to pull a victory out of the bag on Saturday.

A 78th minute try from centre Kieran Moffat completed a late Elthamians’ fightback to keep their faint title hopes alive. But they were forced to dig deep for the victory against a Cinderford side who controlled proceedings for an hour of this incident-packed contest.

Indeed, not for the first time this season, Elthamians were indebted to another outstanding defensive effort which allowed them to stay in touch with the visitors despite seeing little ball.

For the majority of the first half, the Old Boys were forced to defend in their own 22 as Cinderford, on the back of a dominant scrum, monopolised possession and territory.

Their impressive front row trio of George Porter, Jack Preece and James Elliott caused the home side no end of problems at scrum-time, which meant OEs were simply unable to secure enough ball to work their way out of trouble.

Yet, very much against the run of play, it was the home side who opened the scoring on 29 minutes on their first and only foray into the Cinderford 22 during the opening period.

Finally presented with some front foot possession to work with, Tom White's sharp off-load to Adam Batt, allowed the lock to charge 30 metres into the visitors' 22. The ball was recycled quickly for White to send a kick to the corner where Ben Howard was able to collect and slip a scoring pass to winger George Perkins.

It was a well-executed try, but instead of sparking Elthamians into life it was the Cinderford pack who resumed their stifling hold on proceedings for the remainder of the half. And they got their just reward on the stroke of half-time.

Strong running centre Terence Babarinsa split the Elthamians midfield from deep inside his own half and raced 50 metres to the edge of the home 22 before off-loading to his midfield partner Jack Hayes who had the strength to hold off a last gasp tackle and dive over the line.

Liam Hemming’s conversion gave the visitors a 7-5 interval lead, but they will wonder how they only had a two-point advantage to show for their efforts in the opening 40 minutes.

Not that it seemed to unduly worry the Cinderford pack who started the second half the way they finished the first, keeping the ball well and building through the phases deep into Elthamians territory.

Then chaos and confusion. Elthamians, having already lost prop Alex Rogers to injury and under pressure on their own try-line, saw the remainder of their starting front row triumvirate forced to leave the field in quick succession. Hooker Nathan Morris, for a dangerous tackle, and Kieron Scott for an altercation with front row counterpart Porter, were both shown yellow cards in the space of a minute.

After a lengthy stoppage while the officials worked out exactly who should be on or off the field, and in which position, and with Elthamians having run out of props, referee Ben Russell indicated temporary uncontested scrums, with replacement centre Charlie Dockery now installed in the OEs front row and the home side reduced to 12 men.

From the resulting scrum five metres from the OEs line, Cinderford moved the ball quickly down the backline and with a three-man advantage, winger Rueben Norville crossed out wide.

Hemming’s conversion gave the visitors a 14-5 lead and even at that stage with more than 25 minutes still to play, it was hard to see how Elthamians were going to claw their way back into a contest in which they had been firmly second best for much of the afternoon.

But as they have demonstrated so often this season, OEs are at their most dangerous in the final quarter of games and having weathered further heavy Cinderford artillery and with 15 men on the field again, they finally began to make in-roads in the visitors’ half.

A concerted period of play in Cinderford territory allowed White to kick a penalty to touch deep in the visitors' 22. From the resulting lineout, it was Elthamians’ turn to apply pressure through the forwards. Their driving maul collapsed over the Cinderford try-line and after consulting with his assistant, the referee issued a yellow card to the ubiquitous Porter and awarded a penalty try.

With 10 minutes remaining and Elthamians now holding a narrow 15-14 lead, momentum had swung the way of the home side. And they sealed a late victory just three minutes from the end when Kieran Moffat ran on to White's delicate chip over the on-rushing Cinderford defence and touched down under the posts.

There was still time for Hemming to kick a penalty and secure a losing bonus point for Cinderford which secured their National One status for next season - the very least they deserved from an afternoon which they will look back on as a missed opportunity.