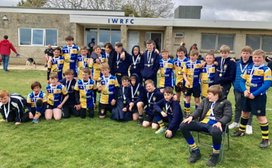 Thanks to Basildon for being excellent hosts in our season opener.

We took the whole squad to Basildon on Sunday and divided the boys into two mixed teams, with each team playing our hosts with the OE's Blues v OE's Whites match in the middle. The rugby was played in an excellent spirit with a lot of commitment from all three sides. OE's ran out winners in both matches against Basildon who had a big physical pack and some fast / strong runners in the backs. Overall the coaches were pleased with the structure and quality of play both OE's team demonstrated which sets us up well for the season.

Next week we're back in Kent to play TJ's and will adopt the same 'mixed team' structure.