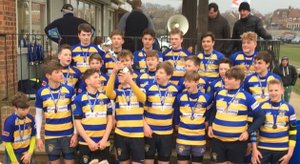 An awesome performance today from the U14 squad in claiming their third Kent Cup in three years and fifth in the last seven season. Despite missing Oscar and George to School 7s commitments the whole squad performed superbly today and should be very proud of themselves.

In the first of the group games we came up against a very strong Thanet side who had both pace and power. Having turnaround 14-0 up we conceded a try early in the second half and really had to dig deep to go onto win 14-7.

Next up we play our old friends at Sevenoaks who always put up a strong showing. The scoreline flattered, although the boys did create and finish some excellent passages of play with four fine tries. Final score 24-0.

The other group was a close run affair with a narrow victory for Blackheath against Maidstone first up, before Beccs turned over Blackheath 7-0 in the second game. This set up a winner takes all encounter between Beccs and Maidstone which Beccs won 12-5 to progress to the Cup Final.

After a narrow OE's victory in the Met Cup Final earlier this season we know we'd be in for a tough game against Beccs. We had a good warm up and the boys came out really focused and ready. From the kick off we flew into the rucks and dominated possession. Some excellent link play between forwards and backs created space for the backs which they used well to score seven tries in the first half and turnaround 40-0.

Beccs started strongly in the second half and fought hard throughout, but we took a few more opportunities and the Referee called a halt to affairs as the score passed 50. We scored three further tries in the second half to run out 55-0 winners.

The quality of our play in the Final today was first class and by far the best performance of the season at just the right time. Beccs were very worthy opponents and never gave up which is testamont to them. The match itself was play in great spirit which both sets of boys can be proud of.

Special mention goes to Ben, Ollie W, Harry, Louis and Connor who won their fifth Kent Cup having started with the club at Under 6. Congratulations also Rufus, Joe, Ollie C and Frankie on their first Kent final win with us. Over the 6 games across the preliminaries and finals day we scored 211 points and conceded just 7. Whilst defence wins matches, the quality of our attacking play over the two days was outstanding and a credit to the boys hard work since pre-season in August. Attention now turns to the Kent 7's in April and an opportunity to do the double double.