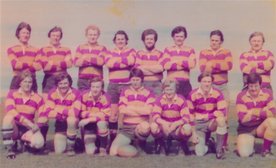 Oldfield is very sad to announce the passing of ex player Alan Brownell.

Alan played in the centre for Oldfield during the 1960s, 70s and early 80s. He joined the Old Boys whilst still attending Oldfield school, initially turning out for Tony Sweet’s talented colts side.

As probably the most individually talented centre ever to play for Oldfield he played all his rugby for the 1st XV, scoring and creating many spectacular try’s. Although he was a little bit on the greedy side! He had the most outrageous dummy, which baffled many of the opposition and even some of his own side.

Alan unfortunately broke his leg whist playing, which although after an attempted come back a year later, ended his career. Alan also played for the Bath Combination and Bath RFC.

Alan will be sadly missed by all at Oldfield and our warmest thoughts and sympathy go out to his family.

His style and individual talent will be remembered by all that had the privilege to play, watch and socialize with him.