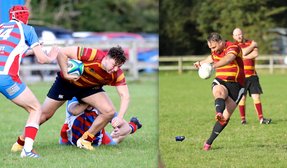 On a difficult afternoon, result and player injury wise...

...Oldfield can take so many positives away from Saturday's 2nd team game at Bristol Telephone Area moving forwards.

Some new faces coming into the fold with no game time behind them, Tom Wood, Fin Shakespeare, Stu Meredith, Kaya Nightingale to name a few, mixing in very well with our band of regulars, giving us a lot of promise for the coming months and the results will follow, I’m sure.

It took the best part of 30 physical minutes on a sunbaked October afternoon for anyone to put points on the board and when it did, the floodgates opened. It started from a well-worked move, which saw Ben Lansdown cut a great angle to get the scoreboard moving.

0 - 7 with the extra 2 added by the new kid on the kicking block, Golden Boots Luke Byrne!

Oldfield switched off momentarily and allowed the Phones to strike back immediately with some strong running down the right side, which saw them go over to give them the 5 on 35 minutes.

Stepping up the pace from the re-start, Oldfield’s Fin Shakespeare and Stu Meredith worked some great space that allowed Ben (He cuts a great angle) Lansdown to pop up again for the try on 38 minutes.

7 - 14 I think young Fin got the extra 2 but it may have been golden boots Byrne ( I was pushing on the shoulder of Tom Wood at the time, after his bullocking run)

With the last play of the first half and Oldfield struggling, it allowed the Phones big inside centre to power through them and create a good overlap for his winger to cross the white wash.

The opening 15 minutes of the second half saw injuries take its toll on Oldfield, which caused a fair bit of disruption but Luke Byrne managed to slot over 3 points to extend the lead to 12 – 17.

A collapsed scrum and a suspected back injury to young Theo Hilton saw a lengthy delay in the game, as he was stretchered off the field. Oldfield needed to regroup and in the 51st minute as they were still trying to get players settled, Phones struck again with more powerful running through the middle and a deserved try.

62 minutes saw a settled period, which saw Fin Shakespeare go on a mazing run resulting in him going over for a well deserved try in the left corner.

A tight call penalty in the 71st minute gave Phones a long-range chance to level the scores and to the kickers credit, he pulled it off.

Both teams kept pushing as the game moved from one end to the other looking for the winner, but in pretty much the last play of the game Oldfield’s tired troops saw their defence breached, giving Bristol Telephone Area victory at the death, but a deserved loosing bonus point handed to Oldfield.

The every improving 2nd XV Team moves on to Yatton's 2nds, away this Saturday.