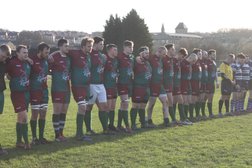 Grovians lose narrowly to Thornes in game to forget

Grovians came out second best in a poor game of rugby that never got going due mainly to a very whistle happy referee who gave the impression that he believed that everyone had come to watch him and not the 30 players on the field.

Ben Brown missed a straight forward penalty after just two minutes. The first twenty minutes saw penalty after penalty for both sides which resulted in a Thornes player receiving the first yellow card of the day.

On 25 minutes a Grovians drive to the line from another penalty saw Brown held up on the line.

On half an hour Thornes scored the first try after a series if drives from a scrum and the conversion was added. They doubled this when after 38 minutes they won their own scrum and scored in the right hand corner.

Right on half time Pad Burns charged down a kick and was unlucky to be tackled right on the Thornes try line.

Grovians scored with ten minutes remaining. A lineout on the edge of the Thornes 22 was driven all the way to the line with James Johnstone coming out underneath a pile of bodies as scorer, Brown converted.

Grovians strived for a winning try but it didn’t come. A game really to be forgotten in a hurry.

Coach Andy Hinchliffe commented “A disappointing loss today. The game never really got going and was stop/start throughout. Indiscipline was punished by the referee’s very busy whistle. Some critical errors at crucial moments also cost us dear as we just could not build any momentum.
As always the players effort and commitment is not questionable but the mental strength to stay disciplined under pressure must be the lesson from today”