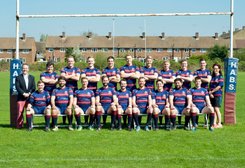 OH Leave it too Late

Habs were back at Croxdale Road to try and regain some momentum following some mixed performances in recent weeks. Once again conditions were good and Habs were confident as they welcomed back some of their part time players.

Ruislip started up the hill and despite sitting in 11th position in the league, are on a good run of form so came into the game looking to cause an upset. The first half was all Ruislip. Despite playing up the slope their pack carried hard and they dominated possession.

At first Habs seemed to have the measure of the Ruislip attack, as although they played with good shape the Habs line held firm. Unfortunately, it was some ill-discipline which cost OH as three turnovers were attempted in the first 15 minutes, all of which resulted in a Ruislip penalty and kept the pressure firmly on Habs. Eventually, despite one excellent try saving tackle from Tom Solis, Ruislip got their reward and opened the scoring, 0-7.

The next 20 minutes didn’t offer much improvement. OH just weren’t able to deal with the relentless waves of Ruislip attack. Rather like the old boys returning from their Italian tour, Habs looked tired and rather like Nigel on tour, Ruislip took full advantage as they now caused problems through the middle of the habs defence. Again demonstrating good retention Ruislip progressed up the field and eventually punched through under the posts, 0-14.

Ruislip rounded off their dominant start to the game with a third try around the 30 minute mark, leaving Habs well and truly up against it. 0-19

Somewhat similar to Clarky and his Tinder addiction, Habs weren’t ready to give up. They were heartened by the fact that the little ball they had enjoyed, had seen them look dangerous. Finally, late in the second half Habs held on to the ball for a period of phases and found themselves in the Ruislip 22. The call came from wide and Habs swung the ball from coast to coast in four slick passes; Jonny to Conor to Miller to Charlie to Solis (if you were wondering). Solis dashed in to score habs first and his first for the club. The conversion was kicked. HT 7-19.

OH looked a different side in the second half. Ruislip still had the lions share of possession but Habs line speed and commitment in defence neutralised the big Ruislip runners. It was OH who were the first to make inroads as they powered up the hill. Some strong carries across the pack took us close but it was Harry “Squishy Baniff” Briffitt who eventually forced his way over for Habs second try. 12-19.

The turnaround from the first half continued as Habs started winning all the 50:50s and managed to control the breakdown. We found ourselves up in the Ruislip 22 again and won a penalty. JW stepped up and slotted it over as the flags went up, only to be over ruled by the referee. A hobbit near the clubhouse was overheard saying “dat ain’t rugby bruv!”

Not disheartened by the decision Habs continued their dominant second half performance. The backs looking dangerous any time they touched the ball. A well executed move screening 12 to hit Briff saw him round their 13 and break towards the Ruislip line. Ruislip recovered but not for long as George Seabrook crossed the line a few phases later. 17-19.

Habs we’re almost there. Still plenty of time left in the game, this would be one of the great comebacks. The stage was set. Habs had a line-out on the half way and they went off the top looking to move the ball wide. Conor passed to Miller who dummied and sauntered through. Unfortunately the success of the first dummy went to his head as he dummied the fullback rather than gift it to a screaming Seabrook. The full
back was having none of it and miller was back In his box. Luckily for Habs they kept the ball and the assault continued with Charlie Johnson eventually diving over to give Habs the lead for the first time in the game. The conversion was kicked, 24-19.

Ruislip hadn’t stopped playing in the second half and they weren’t done yet either. They won back the ball from the kick off and reverted to their first half structure, carrying hard and making yards. Maybe Habs had emptied the tank, maybe they showed a lapse in concentration but Ruislip found themselves in the Habs 22 and the Ruislip scrum half couldn’t believe his eyes as he looked up from a ruck to see no one in front of him. He skipped through and dotted down under the posts. 24-26.

Habs gave it one more throw of the dice with all 15 men digging deep in search of the winning score. Finally we worked our way to the Ruislip 5 meter line and there was space to the left. This was the winning phase.....
Sadly not as a strong counter ruck from Ruislip knocked the ball loose from the ruck and the whistle went. Full time.

Congratulations to Ruislip on an excellent win. Habs with work to do over the remaining 6 games as we face all of the top three.

Special mention to Bundy, our new spoof champion, for making it to, and winning spoof after only just surviving tour where Lee Rossney was going to “bang him out”. Really?!