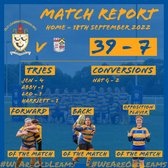 On Sunday 18th September, The Crofts filled again with support for the womens team, who took on Sihillians Ladies in the first round of the Womens Junior Cup. After a weekend of victories across the board from the Old Leamingtonians First XV, Seconds and Colts, there was some pressure on the ladies team to complete the scores to make the weekend a wipeout.

From kick-off, the forwards took charge of the game, with the first try for Jen within moments of the first whistle, swiping from a ruck on the try line, where the opposition had left it completely exposed. The team continued to punch holes in spaces left by the opposition throughout the game.

There were many knock-ons called, resulting in a game rife with scrums. The Old Leams team dominated all of the scrums, some resulting in a scrum penalty, which was capitalised on when the opposition were not yet set. This led to a second and third try for Jen, supported by other members in the forwards pack.

The Old Leams scrums were so overpowering, that the Sihillians side could not compete, and after a discussion between captains, coaches, and the referee, it was decided that the game would continue with uncontested scrums, and the opposition would drop to a field of fourteen players. This allowed Old Leams to spread the defense, getting the ball into wider channels.

When in our 22', Nat G kicked, with the aim to get the ball out of the danger zone, but a chargedown by the opposition resulted in an unfortunate converted try, and the FUF award for the game. She held her hands up, much like the opposition player who charged down the kick.

Just before half time, the opposition winger performed a high tackle on Leo, resulting in a yellow card, meaning they were down to 13 players, for Old Leams to continue with their set pieces and backs moves. At half time, the score was 15-7 to Old Leams.

After half time, the passion continued, with great rucking from the forwards, supportive runs in the backs and a calmer atmosphere than what was at some times frantic rugby in the first half. A brilliant line was ran by Abby, breaking through the Sihillians line of defense, leading to a fourth try for Old Leams, this was successfully converted by Nat G, who took the kick straight under the posts.

Jen then went on to score her fourth try of the game, spotting the space in the defensive line and dominating collisions with handoffs. This was also converted by Nat G. Following a scrum on the right hand side of the pitch, linking up with the backs, the team scored a 6th try, with Leo taking a well-timed pop pass from Abby in the left hand corner, for her first try since she joined the team.

With a few minutes left of the game, the team continued to punch through contact and run successful lines, with the final try coming from fullback Harriett storming through the defensive line to drive the ball to the ground. With seven tries and two conversions, the final score was 39-7.

A special mention to Rosie, who made her debut for the team in this game, joining the second row and visibly improving in confidence throughout the game.

The game has filled the team with confidence ahead of their next fixture, which will be the beginning of the League Games, in an Away match vs Lichfield Green on Sunday 25th September.

On socials search for oldleamswomensrfc and see you at the clubhouse