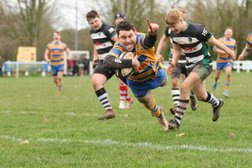 Two tries for debutant centre Matt Witchell and two for winger Liam Wellings helped OLs return to winning form in a seven try victory against a competitive Ledbury side. From the kick off OLs played with the advantage of the elements and made good use of a following wind to keep the ball inside the visitors half of the field committing Ledbury to defence and after ten minutes play good forward pressure deep inside the visitors 22 metre area resulted in Ollie Sarginson being driven over for the first try of the game. The conversion followed from Henry Reynolds.

The game continued with OLs having the greater possession and enjoying good forward domination. The fast running OLs three-quarters created openings and opportunities to but it was an interception deep in the OLs half of the field on the seventeen minute mark when Matt Witchell stole the ball from a rare Ledbury attack and ran the length of the field finally forcing his way over the goal line to score his first try. This was also converted making the score 14 – 0.

With OLs keeping possession it quickly followed that a sweeping move saw the ball passed to winger Liam Wellings who in his usual manner forced his way over the goal line for try number three wide out. The conversion failed but by now and with the wind advantage OLs continued to apply strong pressure on the Ledbury defence and another good interchange of passing saw Matt Witchell score his second try of the game.

With the conversion following OLs moved into a 26 points to nil lead, gaining the 4th try bonus point.
Ledbury came back into the game with five minutes of the first half remaining and when OLs knocked on inside their 22 metre area, Ledbury took full advantage and from the scrum down their fast running inside centre cut through the OLs defence to touch down between the posts. The try was converted and OLs reached half time with a 26 points to 7 advantage.

The second half saw Ledbury with the wind advantage and it was not long into the half when OLs, committed to defence, failed to defend a strong Ledbury charge and conceded a second try. The conversion failed. OLs once again took control and adopted a running game to counteract the gusty wind disadvantage. OLs forwards dominated and the three-quarters created good scoring chances. The next try came from Liam Wellings, who cutting in from the wing, took an angled ball and sliced through the visiting defence to touch down under the posts. Two further second half tries flowed for OLs, both created by good interchange passing between the forwards and three-quarters. The first of the two was scored by back row forward Harvey Broadbent and the last try was touched down by centre Tom Eales. None of the second half tries were converted.
Photos Click here
The final score of 41 points to 12 was a welcome return to winning ways for OLs with debutant Matt Witchell enjoying a good first appearance and overall this was a good whole team performance using the match conditions to full effect.

Below is a link to the Matchday Programme
Programme here